Home to one of the most famous skylines in the world, New York has so much to offer : unmissable architecture, stunning skyscrapers, many of the world’s finest collections of arts and antiquities, seventy-five Michelin-starred restaurants, the legendary theatres of Broadway, the biggest names in shopping, and it’s vast, majestic parks. The city that never sleeps is truly one of the world’s greatest urban delights.

January and February can be bitterly cold but they are the less busy months for theatre visits. Broadway Week in January and September offers 2-4-1 tickets. Between April and June, there are few crowds, it’s warm and the parks are in bloom. June is Pride month with the celebratory march on the last Sunday.

Summer is hot, a good time to explore the islands, visit Coney Island beach and sail around The Statue of Liberty.  The trendy High Line, a public park built on an elevated freight rail line above the streets on Manhattan’s West Side, is the place to be seen in the summer. Autumn is good for avoiding queues for the main attractions. It’s busy between Thanksgiving, 22nd of November, and Christmas. Great for bagging bargains, Black Friday is officially the first Christmas shopping day. 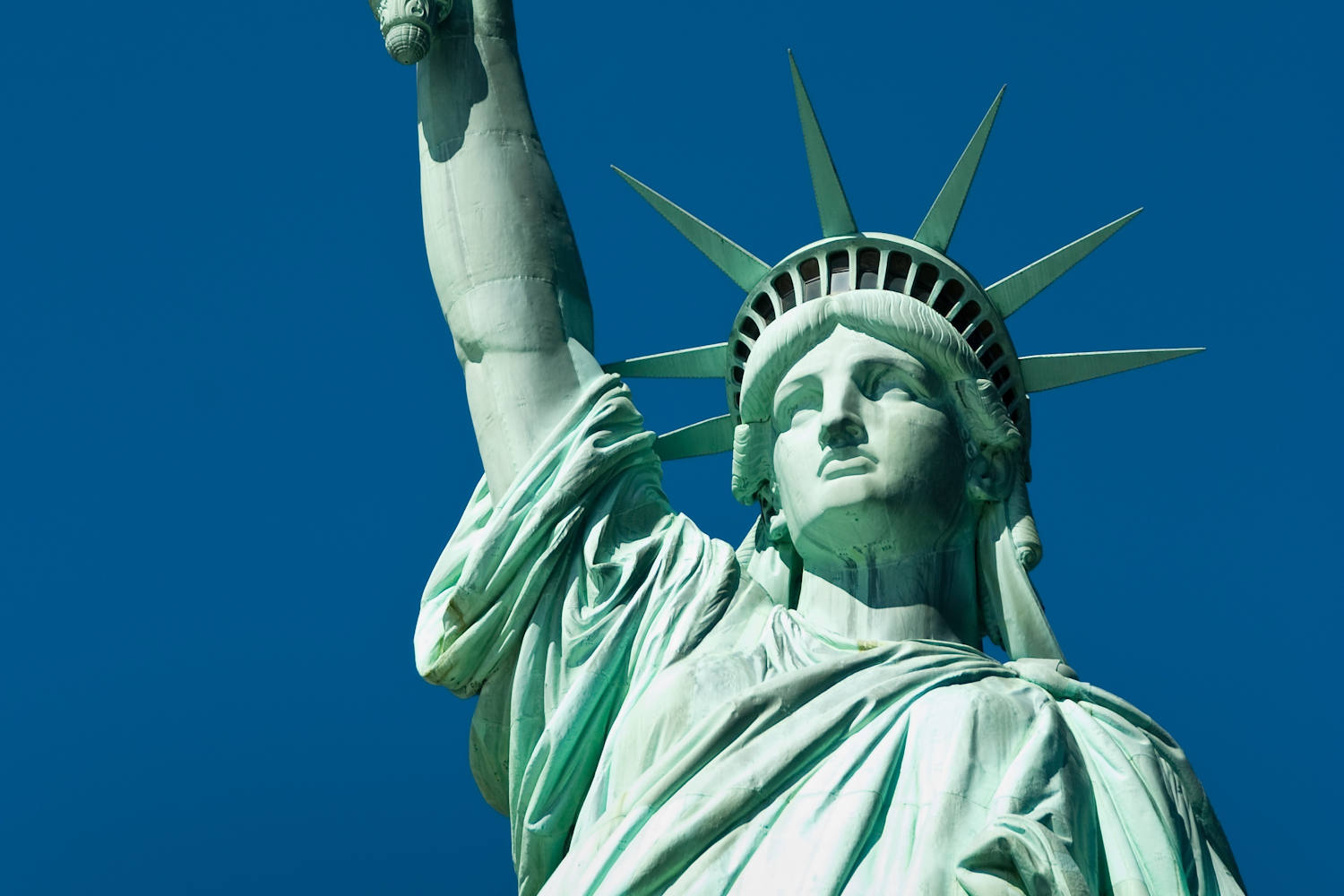 The Statue of Liberty

We’re delighted to highlight a few holiday experiences to enhance your visit to New York. Simply confirm at the time of booking or prior to travelling.
For further details and prices of private excursions and small group escorted tours, to visit some or all of these places of interest, please ask our Personalised Travel Team about pre-bookable experiences and excursions on 0800 008 7288.

Views by day and night

Take the F train for daytime views of Manhattan from Brooklyn Bridge Park.
At sunset, experience the views and interactive light sensory room,
Breezeway, at Top of the Rock, Rockefeller Center. 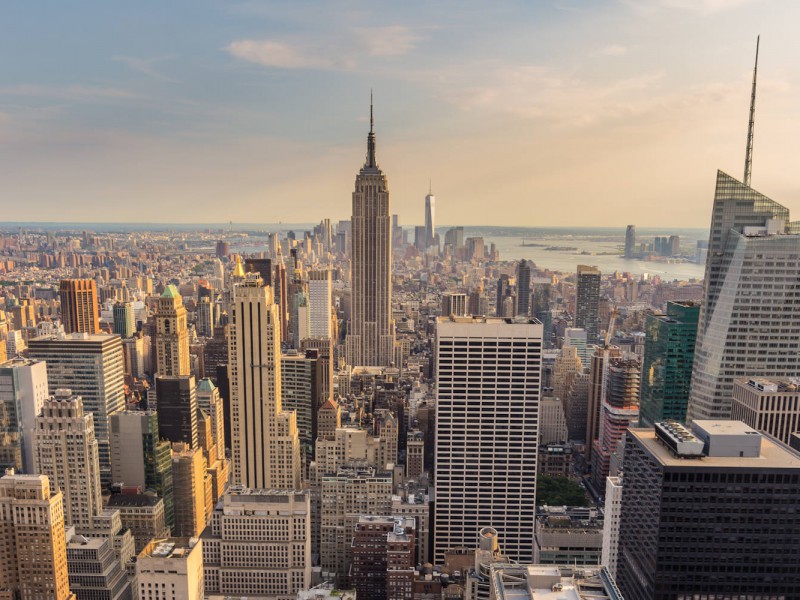 An all-in-one pass instantly accessible via your mobile phone with access to 100 top attractions such as the Empire State Building. Includes walking tours, sightseeing cruises, museums and attractions. 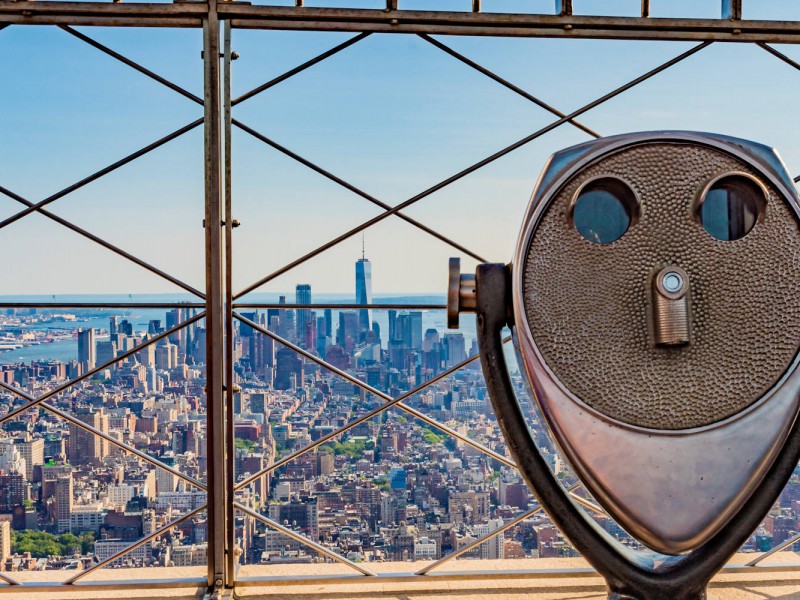 A must on any trip to New York, from the spectacular lobby all the way up to the majestic observatories, this iconic centrepiece of Manhattan is a testament to the ingenuity, vision and spirit of the city. 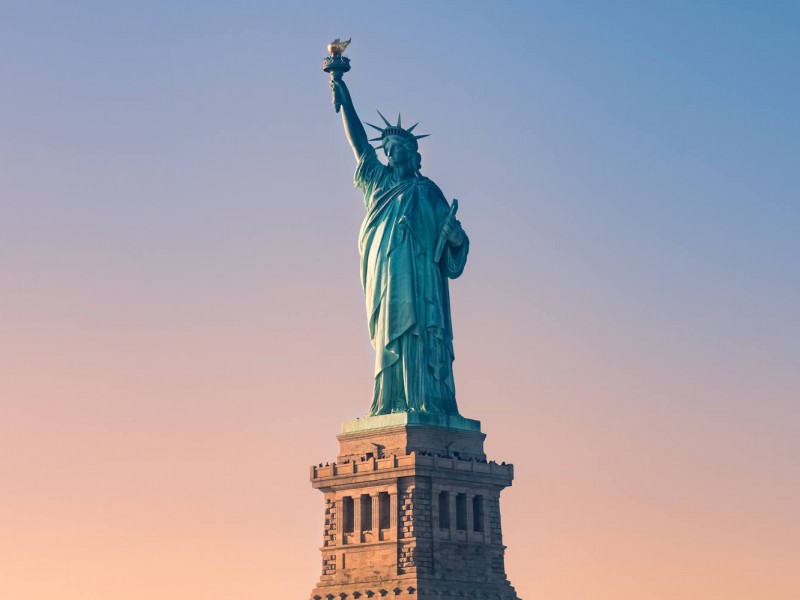 Statue of Liberty and Ellis Island (half day)

Take one of the first morning ferries to Ellis Island to beat the crowds and visit the Statue of Liberty in the clear morning light. An expert guide is on hand as you admire unforgettable views of the skyline. 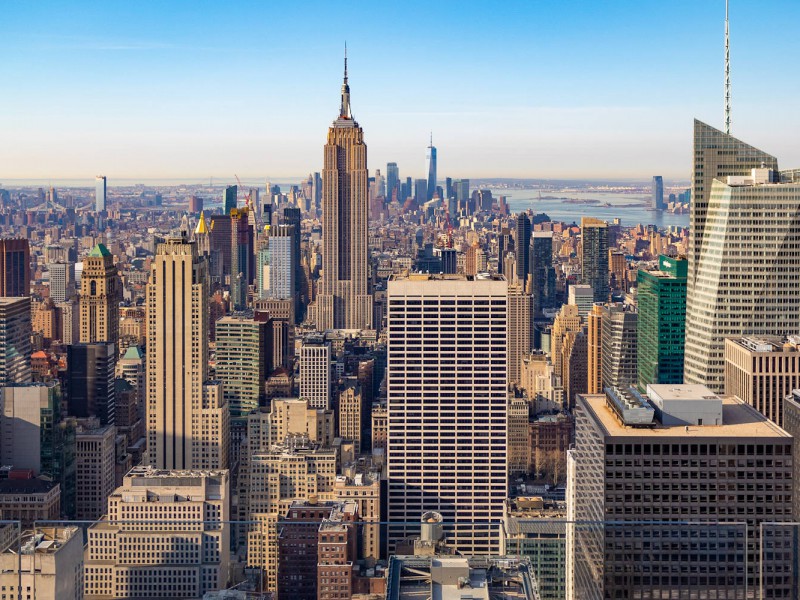 Top of the Rock 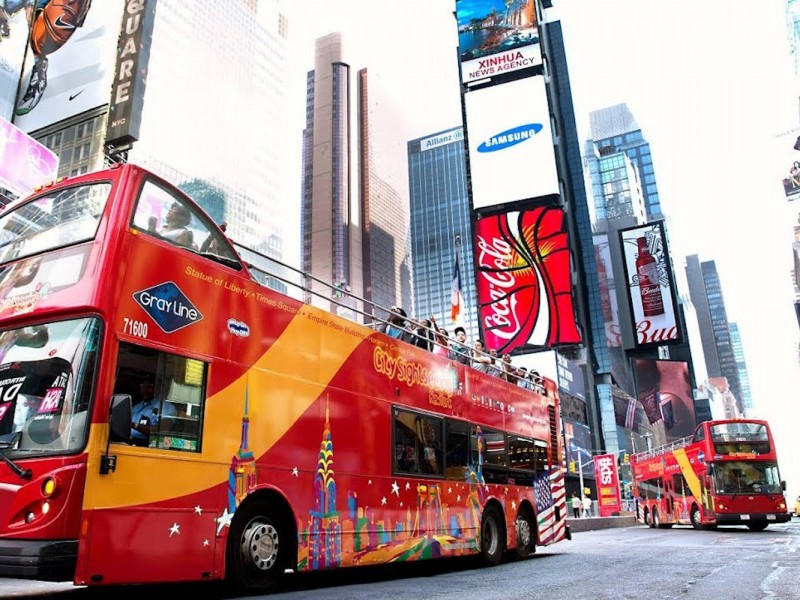 A hop on, hop off sightseeing tour is the best way to see all the iconic landmarks and attractions of New York. Explore Downtown, Midtown and Uptown at your own speed on comfortable double decker buses with audio guides. 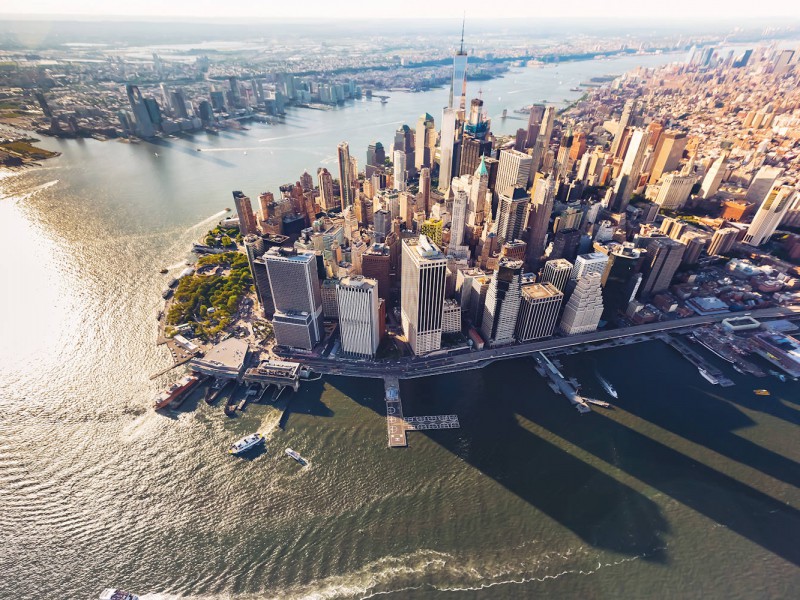 Travel from New Jersey and head north along the Hudson, passing over all the major sights of Manhattan with fantastic photo opportunities. See the bright lights of Times Square from a different angle. 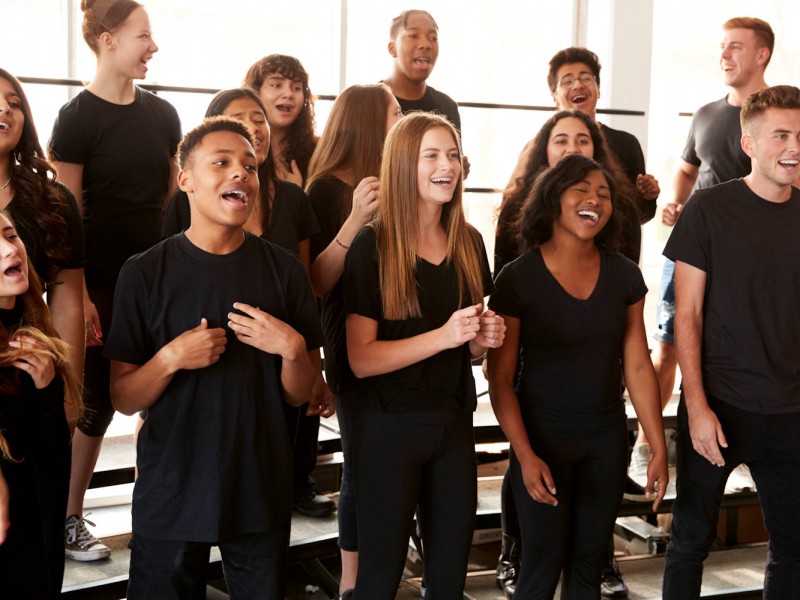 Lose yourself in the mesmerising a cappella voices of the ARC Gospel Choir. See Harlem’s most famous landmarks, such as the Apollo Theater, and learn the fascinating history of Harlem. 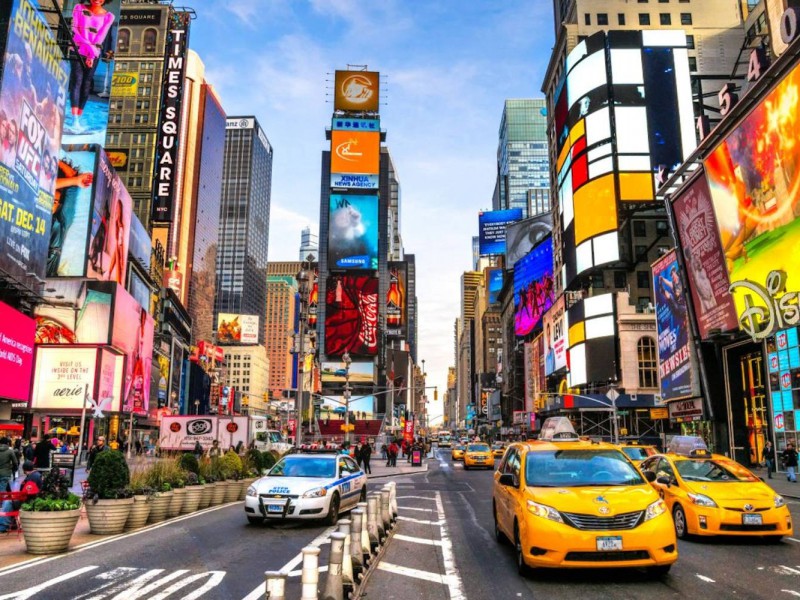 Visit the famous hotspots featured in your favourite TV series and discover some of the most famous locations used in Hollywood movies. 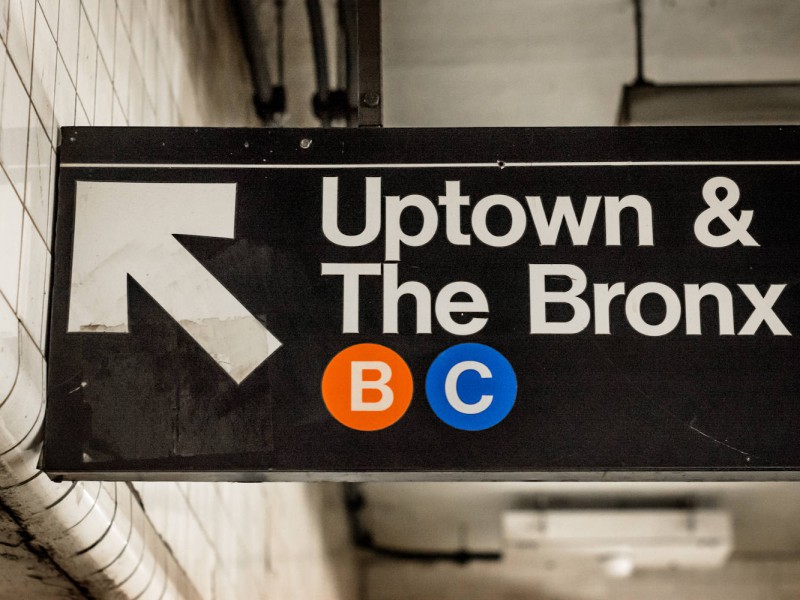 Upper and Lower Manhattan (half day)

Enjoy the comprehensive view at the heart of the world’s greatest metropolis with this sightseeing bus tour which allows you to discover both the Uptown and Downtown districts of Manhattan. 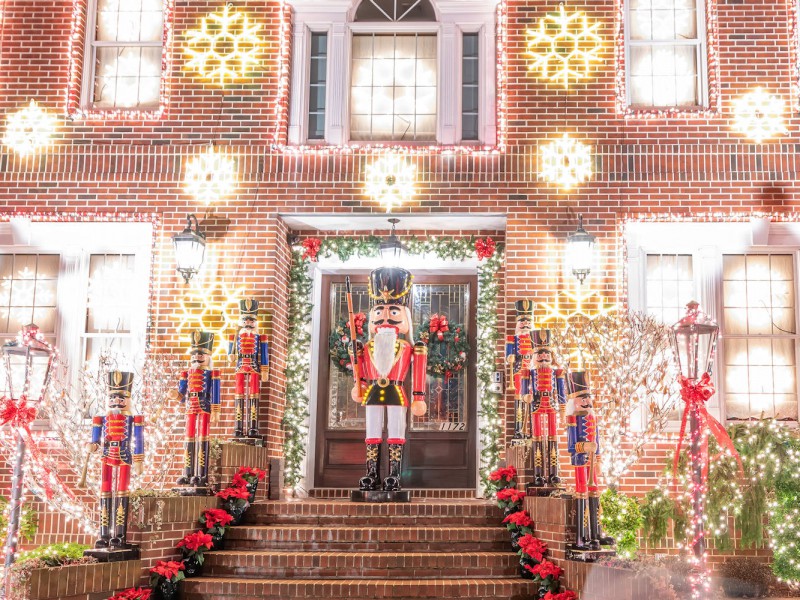 Explore Dyker Heights with its incredible display of lights and decorations, and houses festooned with glowing Santas, reindeer and elves. Truly a sight to behold each December. 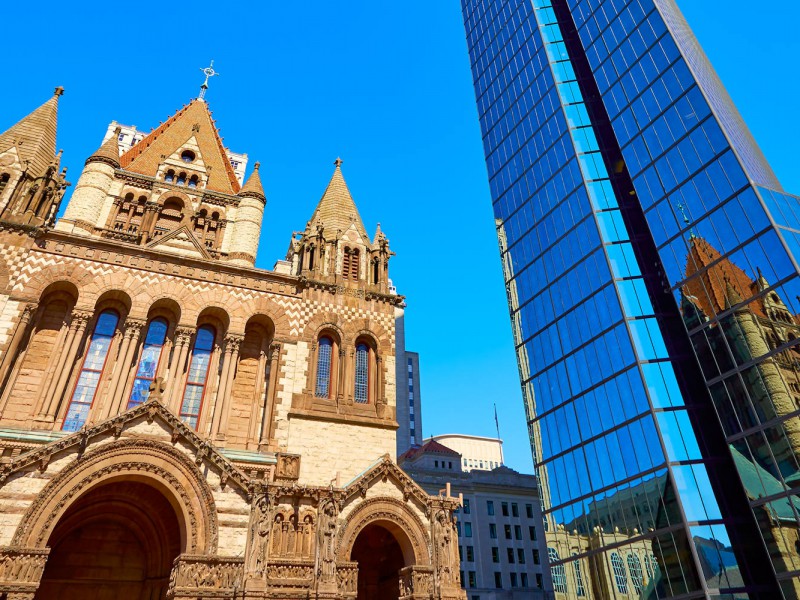 Travel north to Boston, for a day of walks including Harvard Yard, part of the famous University campus. Cross the Charles River to visit Copley Square and Trinity Church. Walk the Freedom Trail, take lunch at Quincy Market and visit the site of the famous Tea Party.

Experience the beauty, scenic landscape and natural wonder of Niagara Falls on board one of the historic Maid of the Mist boat cruises, or from one of the many observation points. An adventure by coach with tour guide.

The best way to experience New York is on foot. Its compact size makes it a delight to wander the streets. With a mix of more than 200 nationalities each and every neighbourhood is dramatically different, but often separated by as little as one block or at most a few avenues. There’s Downtown, the financial district with Wall Street, Ellis Island, the Statue of Liberty and Brooklyn Bridge. There’s Chinatown, a seemingly busy slice of Shanghai or Beijing which neighbours Little Italy.

For fine dining, shopping, celebrity-spotting and cast-iron architecture head to the former factories and tenement buildings of the now fashionable TriBeCa, Nolita and Soho. For bars, music clubs, art galleries and innovative theatre it has to be Lower East Side and East Village. The charming, leafy and low-rise Greenwich Village leads a bohemian life and is home to Christopher Street. There are the cultural, on-trend credentials of Midtown and the High Line.

Times Square and Midtown West are areas that most people think of when they think of New York: theatre, museums and bright lights. For iconic skyscapers and unsurpassed window-shopping, Midtown East lives in the shadow of the Empire State Building, the Chrysler Building and Grand Central Terminus. Uptown is home to Central Park, the most expensive real estate in the world, and the rapidly transforming African-American neighbourhood of Harlem.

Should you tire of the streets, the stunning Manhattan skyline is vibrant and picturesque when viewed from the cruise boats of the Hudson River.

A New York explorer pass gives great savings on many of the city’s top attractions. Further savings can be made on shopping but be wary of import limits and the state tax which is added at the till point. For shopping bargains, try the outlet stores at Fulton Street, Brooklyn between Adams Street and Flatbush Avenue.

Tipping is obligatory, $2 per bag for porters and 20% on restaurant bills. Try to eat out early, no later than 6pm, to avoid queues. Some restaurants offer better value for lunch. For quirky eating out options try the rotating View Restaurant and Lounge at Times Square, or Ellen’s Stardust Diner on the corner of Broadway and West 51st: 50’s themed with singing waiting staff.

Keep some photographic ID with you at all times, it’s policy in many places to be asked for this.

Over 840 acres of green space right in the middle of Manhattan, with meadows, walkways and lakes, Central Park needs no introduction. Brooklyn Bridge Park features landscaped parkland with jaw-dropping views of Manhattan. The High Line is a public park linking nature, art and design.

The Met, Museum of Modern Art and the Guggenheim are just the beginning of a dizzying list of art-world icons. But don’t overlook less starry options: the National September 11 Memorial & Museum, the Museum of Jewish Heritage and Stonewall Inn, Christopher Street, West Village.

The Empire State Building was built in just over a year, and the views from its 86th-floor outdoor deck and 102nd-floor indoor observatory are sublime. The Edge at Hudson Yards and Top of the Rock at 30 Rockefeller Plaza (prebook your visit in person to avoid the queues on your chosen day) also offer umissable views of the city.

Completed in 1913, Grand Central Terminal is an architectural masterpiece and one of New York’s finest beaux-arts buildings. The ticket counters are Italian marble. The Tennessee marble floors of the glorious concourse and it’s huge vaulted ceiling are best viewed from the balconies.

Ellis Island, the entry point of 12 million immigrants to New York, and Liberty Island’s Statue of Liberty can both be visited in the same day. Admission to the statue’s crown is limited so book early. Coney Island beach is a great summer escape.

The theatre district needs no introduction. Numerous on and off Broadway shows are performed in the area that encompasses 41st to 54th streets. Times Square’s tourist information office gives full details of what is playing.

Ask our travel consultants about twinning New York with other cities: Boston, Washington DC, San Francisco or Las Vegas. Or travel onto the pink sand beaches of  Bermuda. See our dedicated Caribbean brochure for further details.