Adding variety and excitement to a holiday can make you feel like you have been away for longer, consequently giving you a more memorable experience. With its legendarily efficient transport network and iconic railway journeys, Switzerland is the ‘cream of the crop’ of multi-centre holidays in Europe. Combine a cultured city break with a summer retreat in the mountains or a chocolate and cheese tasting experience with glorious scenery. In Switzerland, some of the world’s highest, oldest and most leisurely railways are at your disposal. Traverse through world famous peaks, experience alpine adventures and discover a country where the grass is actually, always greener.

A Switzerland multi-centre holiday can include many things, be it hiking, biking, climbing, skiing, food tasting, cheese tours, wine tours, Christmas markets or watersports, you name it and we’ll take care of the arrangements. With first-hand knowledge, our team are on hand to create the perfect itinerary, personalised to you. For inspiration, we’ve put together our favourite Switzerland multi-centre holidays. 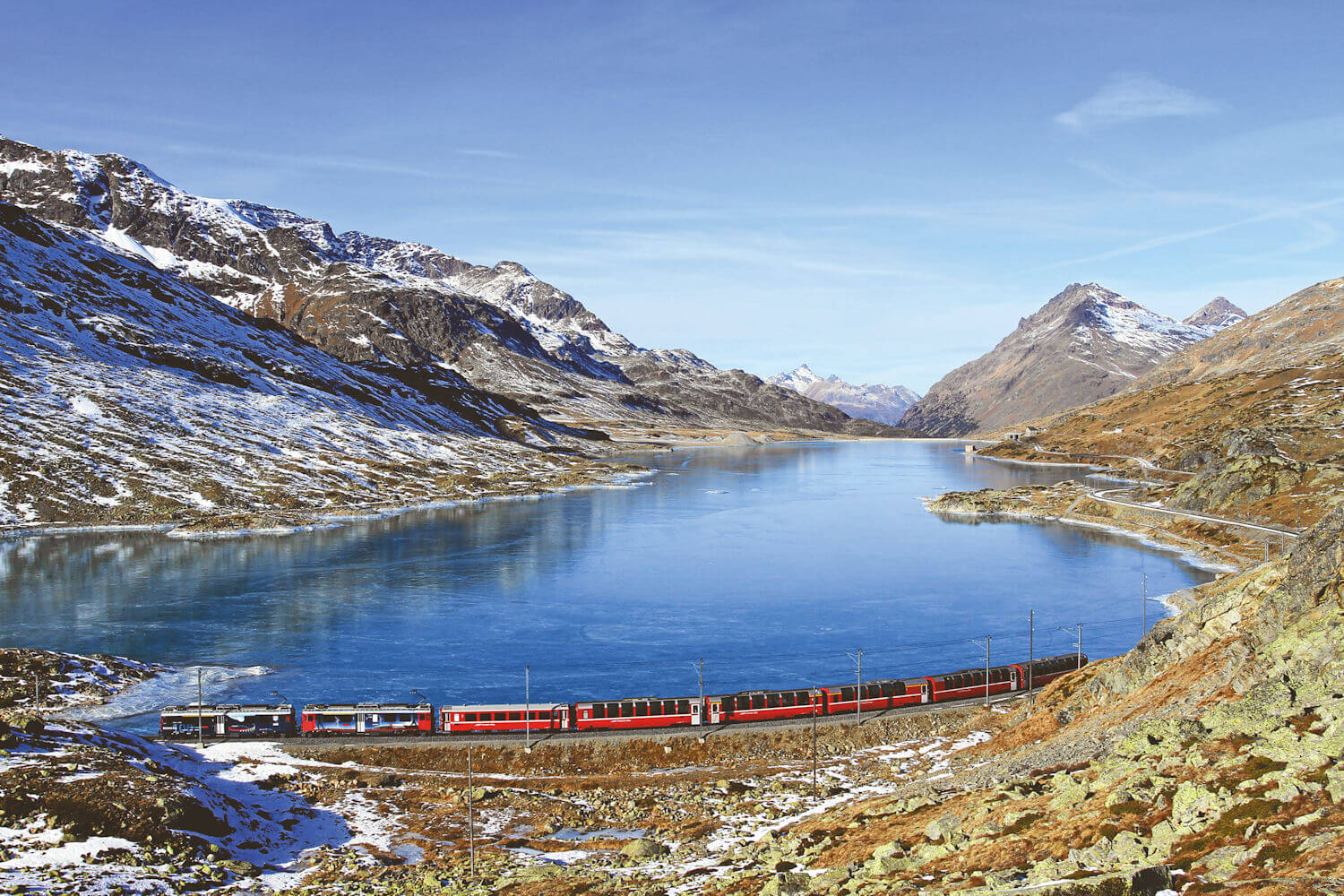 Traverse leisurely through bright green pastures, glacier encrusted mountains and glittering lakes on two of Switzerland’s most iconic rail journeys. Soak up the glamour of St Moritz and take a one-of-a-kind day trip to Tirano in Italy aboard the Bernina Express before travelling to Zermatt on the legendary Glacier Express; the world’s slowest express train with over 291 bridges, 91 tunnels and climbs over 2,033m altitude.

Fly in to Zurich and catch a 4 hour scenic rail journey to the exclusive St Moritz where astonishing peaks, crystalline lakes and emerald forest take centre stage. Long has it been a destination for the rich, famous and royals, St Moritz is also great for hiking, biking, water sports and exceptional shopping.

This 3 hour train journey from St Moritz climbs to 2,253m where snow-capped mountains, vast turquoise lakes and surging waterfalls all await. Witness the engineering masterpiece that is Brusio’s circular viaduct and travel through 55 tunnels and 196 bridges before arriving in the Italian town of Tirano where you’ll enjoy a distinctively Mediterranean lunch.

Did you know? The Bernina Express actually visits more glaciers than the Glacier Express.

This 8 hour journey between St Moritz and Zermatt is one of the most popular in Switzerland. The panoramic carriages pass through swiss alps, lush valleys and even through a glacier. We recommend booking lunch, where you can choose between one and three courses to be enjoyed as stunning alpine sights pass by.

At the foot of the imposing Matterhorn is the car free town of Zermatt. Traditional wooden chalets nestle themselves between flower filled meadows against a spellbinding mountain backdrop. Shop in boutiques, artisan food stores and savour the cosy chalet feel of this delightful town. From Zermatt, are many walking trails, mountain railways and cable cars to take you to hypnotically beautiful vistas. 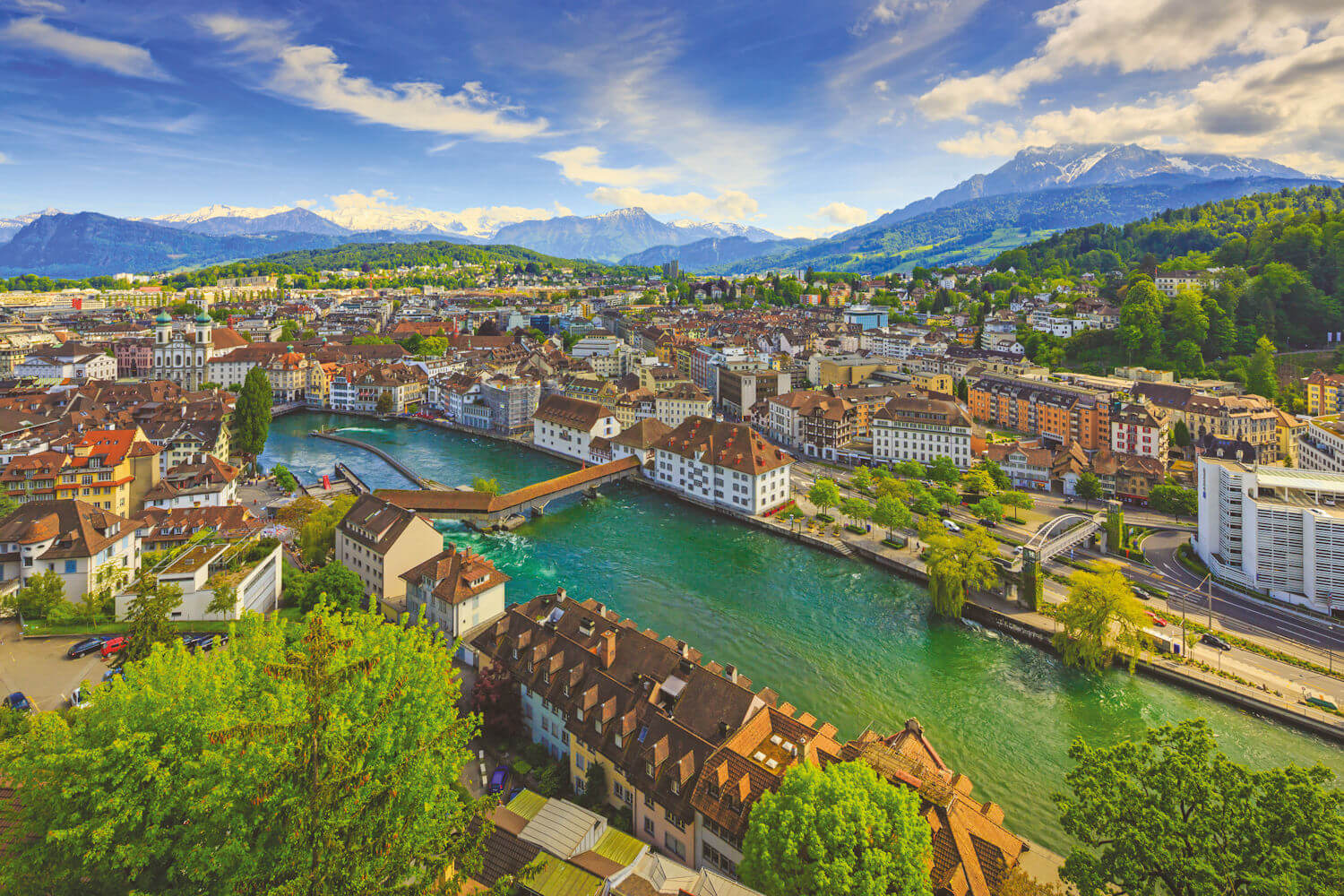 With its many Cantons and languages, some areas of Switzerland differ greatly, and no two places are quite as different as Lucerne and Lugano. Discover the deep routes of Alpine tradition in the mountainous region of Lucerne followed by Lake Lugano where the language is in fact Italian, and the climate is decidedly more Mediterranean. The two areas are united by the very special Gotthard Panorama Express and a delightful journey via paddle steamer.

Just 1 hour by train from Zurich, reaching Lucerne is effortless. Once you arrive, you’ll uncover a bustling lakeside town which has attracted the likes of Queen Victoria and Wagner. Discover medieval wooden bridges, the well preserved Altstadt (Old Town) and a waterfront promenade which all give the town an idiosyncratic beauty. Enjoy a Swiss chocolate adventure at the Swiss Museum of Transport or complete a guided walking tour. We highly recommend taking the cogwheel railway to the peak of Mount Rigi for 360 views of Lake Lucerne.

Take a 2.5 hour lake cruise to Fluelen on a vintage paddle steamer, followed by a 2 hour rail journey along the Reuss river valley. Glide past altitude gaining loops and through the 15km ‘Old’ Gotthard Tunnel before finally descending to Bellinzona.

As the train arrives, it’s hard to miss the more Mediterranean ambience of this Italian style town. With its shuttered windows, flowered balconies and sunny climate, Lugano is perfect to simply enjoy dolce dar Niente or ‘Sweet Idleness’. Savour the delights of the mountain rimmed lake, from its designer boutiques, bars and pavement cafes to its hiking trails and breathtaking scenery. 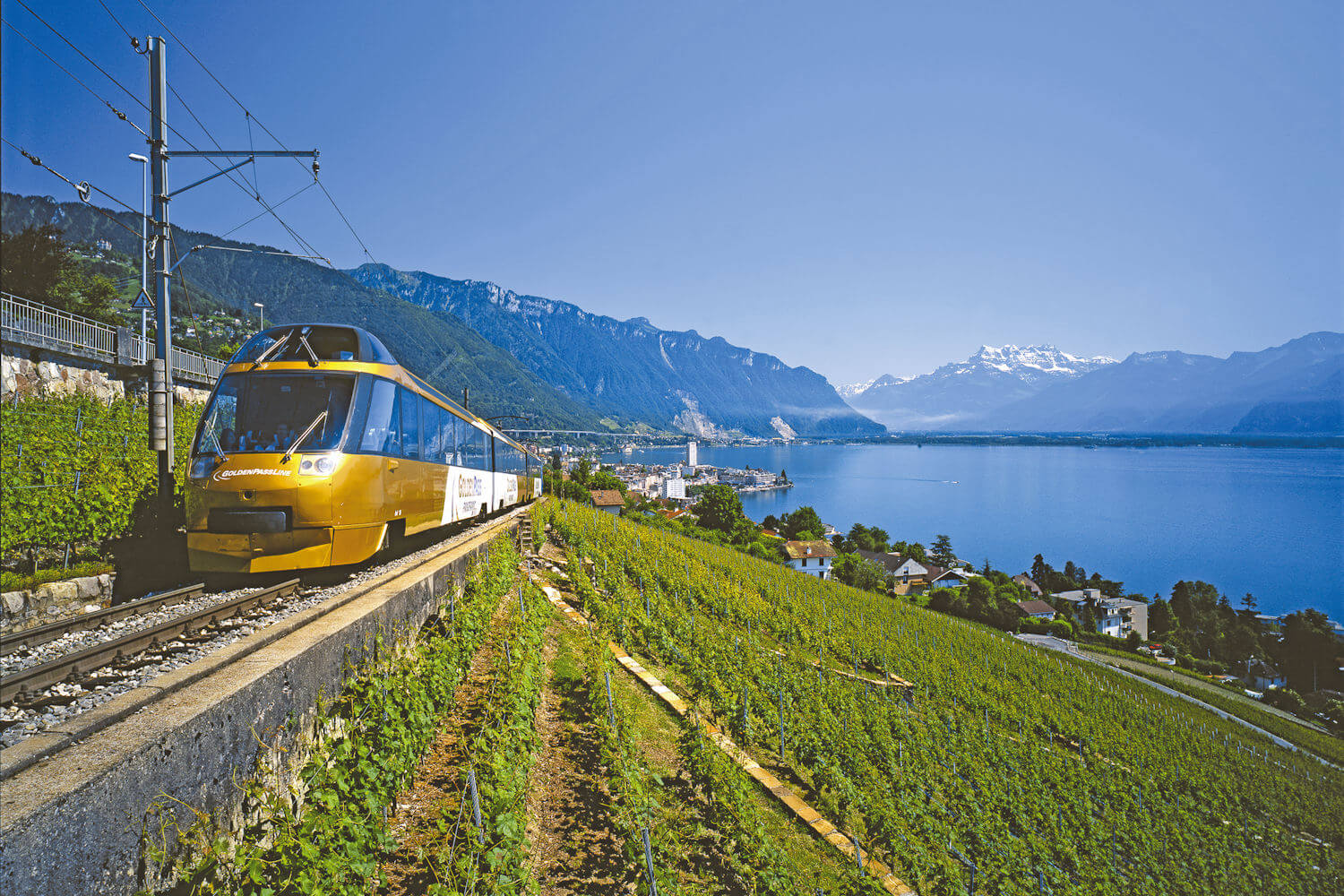 Travel through 3 of Switzerland’s most picturesque regions including Lucerne, the Jungfrau and Montreux, with plenty of time in each to explore. Take in the delights of Lucerne and its refreshing lake before a scenic journey along the Golden Pass Route, through quintessentially Swiss countryside to the marvellous region of Interlaken. From here take in more Swiss scenery aboard the panoramic train to Montreux where Lake Geneva, vineyards and traditional villages await.

Surrounding Lake Lucerne is a tapestry of green hillsides, glaciated peaks and chocolate box alpine towns. Ride a cable car to majestic mountain view points or travel from one inviting town to another via relaxing lake boat.

In just 2 hours along the scenic Golden Pass route you’ll reach the classic Swiss region of Interlaken. With its bright green pastures and glacier fed lakes, looming beneath snow covered peaks, Interlaken is a highlight of every Swiss visit. Reach Europe’s highest train station (3,454m) upon the impressive Jungfraujoch and step in to the scenery seen in James Bond’s ‘On Her Majesty’s secret Service’ at the 2,970m peak of the Schilthorn, where you’ll gaze upon vistas of Monch, Eiger and Jungfrau.

From Interlaken, the Golden Pass Panoramic train glides along the banks of Lake Thun then on to the green alpine pastures of the Simmental Pass, before reaching the emerald green forests, vineyards and traditional villages of Lake Geneva. The journey takes between 3 and 4 hours.

The shores here are lined with exclusive towns, including the Belle Epoque Montreux. Surrounded by UNESCO vineyards of Lavaux Vinerama, and thanks to a pleasing mild climate, Mediterranean plants such as pines, cypress and magnolia all thrive here. Various artists and writers have shown a fondness for the town including Lord Byron, Hans Christian Anderson, Victor Hugo and Charles Dickens as well as more modern artists including Charlie Chaplin and Freddie Mercury. Indulge in wine tasting, peaceful lakeside walks and food experiences such as the chocolate train, cheese sampling and the many fine dining restaurants on offer.

Switzerland’s rail network is legendary for its efficiency and stress-free way to travel through amazing scenery. Our Switzerland multi-centre holidays normally include first class rail transfers. Zurich and Geneva are the main airports which are well connected to many popular routes across the country.

For walking, biking and watersports the summer months are the best time to visit Switzerland. From June to October are the most pleasant months to visit for reliable weather. Autumn is also a lovely time to visit, as tourist numbers are low and although temperatures start to drop, the days are still warm and met with autumnal colours as well as the chance of snow christening the mountains. Winter is a wonderful time to visit Switzerland for winter sports, city trips and Christmas markets.

Prices featured are a ‘from price’ per person based on 2 adults sharing a room including economy flights and private transfers. Savings are per couple for selected dates against original system pricing; alternative dates and departure airports available. All holiday offers are subject to limited availability and change. Full booking conditions here.