‘When in Rome, do what the Romans do’- they were of course talking about food when they coined this famous term. Food and cooking is so embedded in Italy’s culture that it can be seen as a ritual of sorts, and one thats certainly to be embraced when on holiday there. Daily life comes to a standstill at lunch time, with each region preparing their localised dishes fresh from the market. A cooking lesson can give insight into the life of the nonna’s across the country and how they prepare these traditional delicacies. 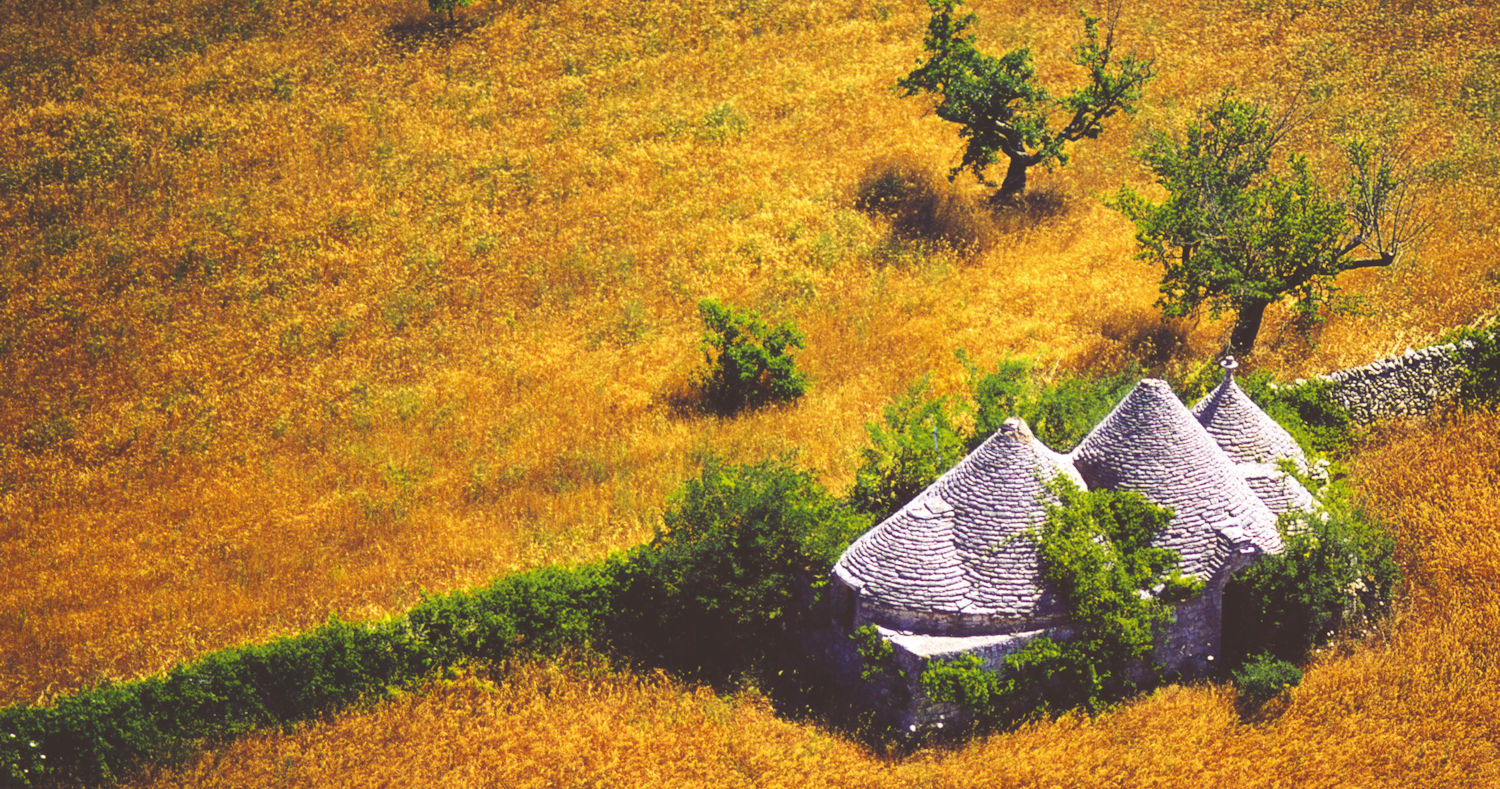 For many years this rural and quiet region took a backseat to busier and more built up areas in Italy. However, recently it has become the destination to go to for its beaches, ancient sites and most importantly, its food. Due to Puglia’s agricultural ways and frugal past, the dishes may be simple, but are certainly not lacking in flavour or creativity. Here they produce a substantial portion of the country’s olive oil and wine, with large areas of farm land generating many of the ingredients used in Italian cuisine.

Some of the region’s best-known foods include:

A pasta which translates as ‘small ears’, Orecchiette is traditionally made with just flour and water, as egg was considered a luxury in the past. Frequently accompanied by an array of different meats or vegetable-based sauces, it is often eaten as ‘Il Primo’, the first course at lunch.

This traditionally Puglian flour which translates as ‘burnt wheat’ is a symbol of Puglia’s deprived past and is now a staple ingredient in cooking bread and pasta with its distinct nutty flavour and dark colour. As the story goes, farmers would allow poor villagers to collect the burnt grains before they made way for the new crop. In recent years it has become increasingly popular with chefs around the world.

There has been a buzz around this cheese for a while now. It is being served up in restaurants everywhere but it was on Puglian plates long before the entire world was aware of it. Typically, it should be served up 24 hours after its production, so Puglia is where you will find it at its freshest. This beautiful cheese often appears with cured meats, tomatoes and a splash of olive oil.

For a traditional setting in which to partake in a cooking class, look no further than one of Puglia’s many masseria properties. A masseria is a farm house come hotel, which are incredibly popular across Puglia. They feature a handful of bedrooms boasting traditional charm, based in a rural location. The Masseria Montenapoleone is one of the regions finest. With its farm to table ethos and passionate owners, guests are guided through an honest and authentic cooking lesson.

One free cooking class is included in stays with Classic Collection Holidays. 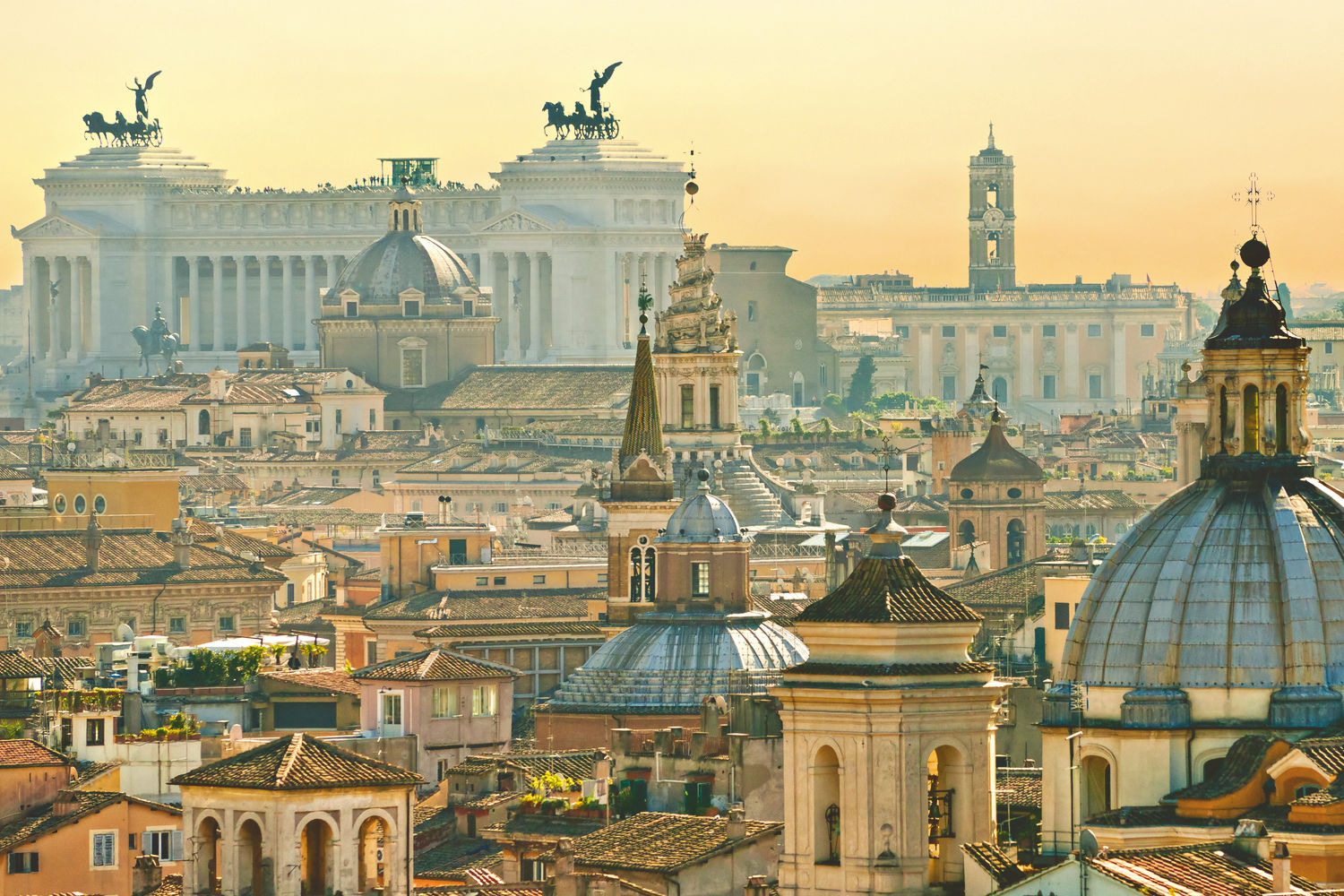 The beating heart of Italy is a wonderful place to recreate some of its many culinary triumphs. This gastronomic hub is thriving with many visitors not only there for the beautiful architecture but also  the cities famed cuisine. Located on every corner and down every side street you will find small family restaurants, with just a handful of tables, serving up local dishes made daily. There are many staple dishes tied to the Lazio region, with most originating from humble beginnings and considered food for the working class, but that are now eaten by all Romans daily.

A delicious and gooey appetizer, this traditional Roman food can be found in pretty much every restaurant and is a mix of some of the most typical Italian foods there are: Zucchini flowers, Mozzarella and Anchovies coated in batter and fried.

This simple but by no means boring dish is on every restaurants pasta menu. The pasta used is called Tonnarelli, which to the eye looks like thick spaghetti and is mixed with pecorino cheese and black pepper. This tasty and modest pasta spent many years under the radar but is now world-famous staple from Roma.

Although not native to Rome, like many dishes in Italy the Romans have made their own version. The Roman version is thinner and crispier due to the adding of one ingredient, olive oil.

There is no better time than a warm summer night in Roma to do a pizza making class. From £83 per person guests can participate in a three-hour pizza making class and enjoy their wonderful creation afterwards. Guided each step of the way by an experienced teacher this excursion operates daily and starts at 5pm. Or sample an authentic Italian experience called ‘Exclusive cooking lesson with grocery tour’. Where guests are taken to the market to buy the produce they are going to use, before partaking in a pasta making course and enjoy lunch on the beautiful Tiber Island. 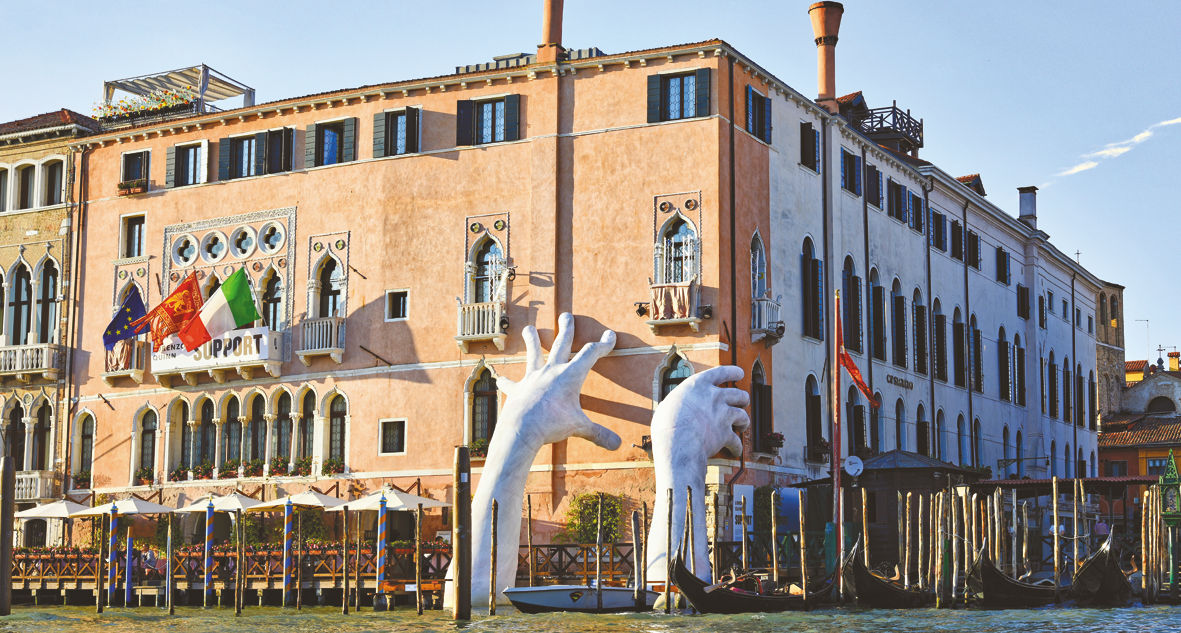 Venice has a unique cuisine that makes use of ingredients from surrounding areas. Fish is a big part of their cuisine and comes daily, delivered from the fishing boats straight to Rialto fish markets. then into the restaurants of Venice. Inspiration is also drawn from the Tyrol region in the north with polenta and meat featuring often. Do not be fooled, not all restaurants in Venice are expensive, if you wonder away from San Marco Square you can find delicious and reasonably priced food. Try the areas of Santa Croce, Cannaregio or Giudecca.

In Venice you will find the freshest Fritto Misto. Caught daily off the coast in the Adriatic Sea and served in restaurants around the island, usually with a side of polenta or grilled vegetables. The restaurant Antico Calice located in the heart of Venice is known to serve up some of the best fritto misto and is frequented by the gondoliers of Venice for lunch.

This dish consists of sardines marinated in vinegar with onions, raisins and pine nuts. A staple for many years, traditionally made by sailors to preserve fish for a lengthy time. Fast forward to present day Venice this dish is now served up regularly.

This salty dried cod is soaked, boiled and whipped into a smooth paste, then mixed with olive oil, salt and pepper. It is then served on small pieces of bread during the pre-dinner aperitif.

There is no better experience than getting an insight into the top secrets of a Venetian chef. At Hotel Ca’Sagredo for £123 per person you can join a chef on a tour of the famous Rialto fish market to buy fresh local produce. You will then cook under the chefs’ watchful eye before enjoying your culinary creation. 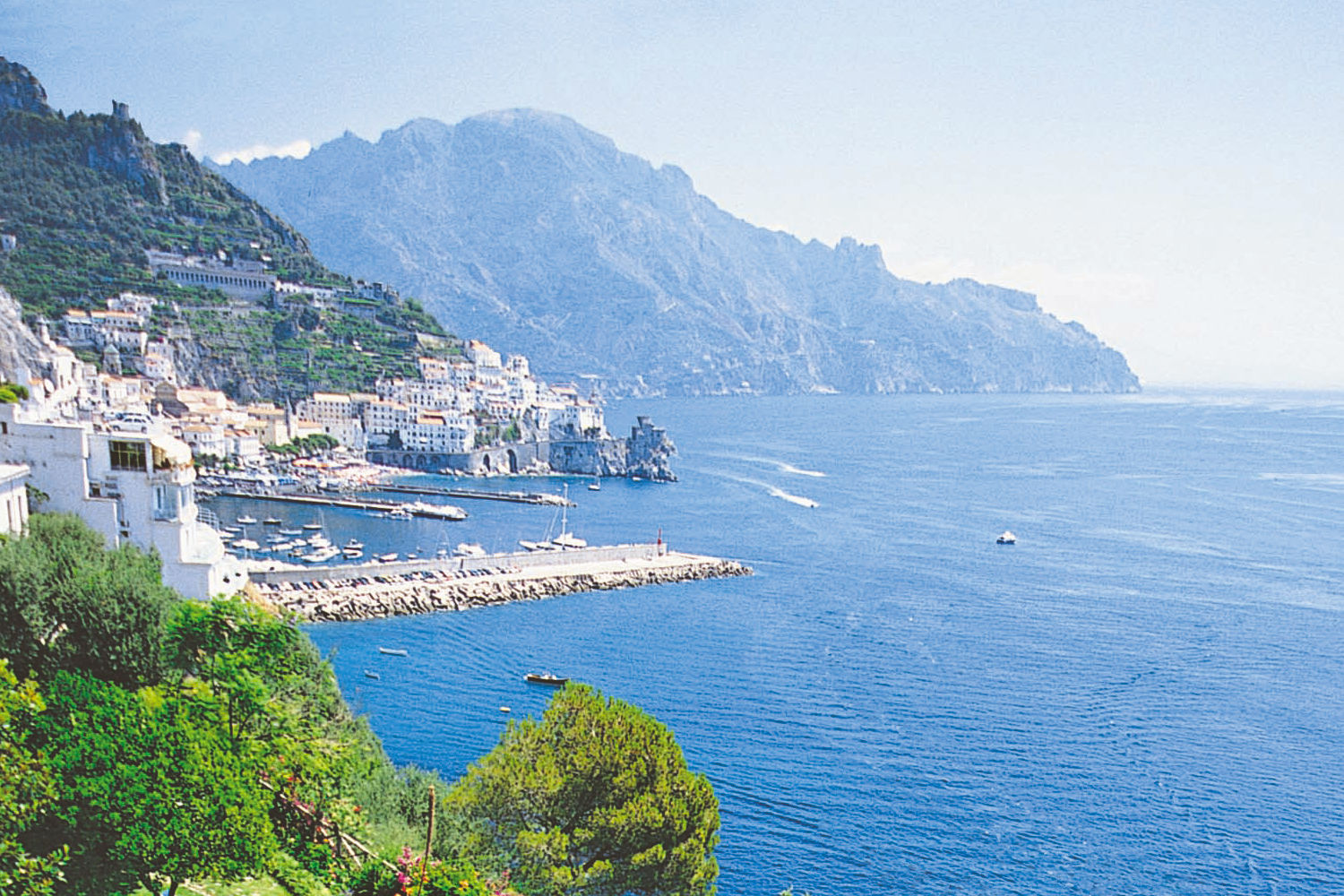 Naples and the Amalfi coast

Neapolitan food comes from humble beginnings. The fertile soils close to Vesuvius are used to grow vegetables and produce wine, fish is caught from the gulf of Naples and bread cooked in wood-fired ovens. Nowadays when people think of Neapolitan food, tomatoes, pizza and gelato are all conjured up in one’s mind. Not to mention the lemons that grow to the size of a football.

Naples is known as the birth place of Pizza and strict rules must be followed to ensure it is an authentic Neapolitan Pizza. San Marzano tomatoes and Mozzarella from Campania must be used, as well as type 0 or 00 flours. Finally, it is cooked for no more than 90 seconds in a blazing wood fire oven and served fresh at the table.

This delightfully warming, and filling dish is famous the world over. Its origins began in the south of Italy (despite there being a small disagreement surrounding the Parmesan cheese, which is from Parma in the north) this dish features on most restaurants menus in Naples. It consists of sliced Aubergine which is fried and coated in tomato sauce, basil, mozzarella cheese and Parmigiano cheese.

This layered sweet pastry is shaped like a small shell and has been a staple in the Campania region for many years. They say it was created in the Santa Rosa Monastery on the Amalfi coast in the 17th century and contains ricotta and orange peel. Many Neapolitans still enjoy this delight with a mid-morning espresso.

Venture to the outskirts of Sorrento for a three-hour cooking class at Restaurante Tirabuscio. Here you will learn to make typical food from Naples whilst guided by a local chef. This is bookable through Classic Collection Holidays from £88 per person. 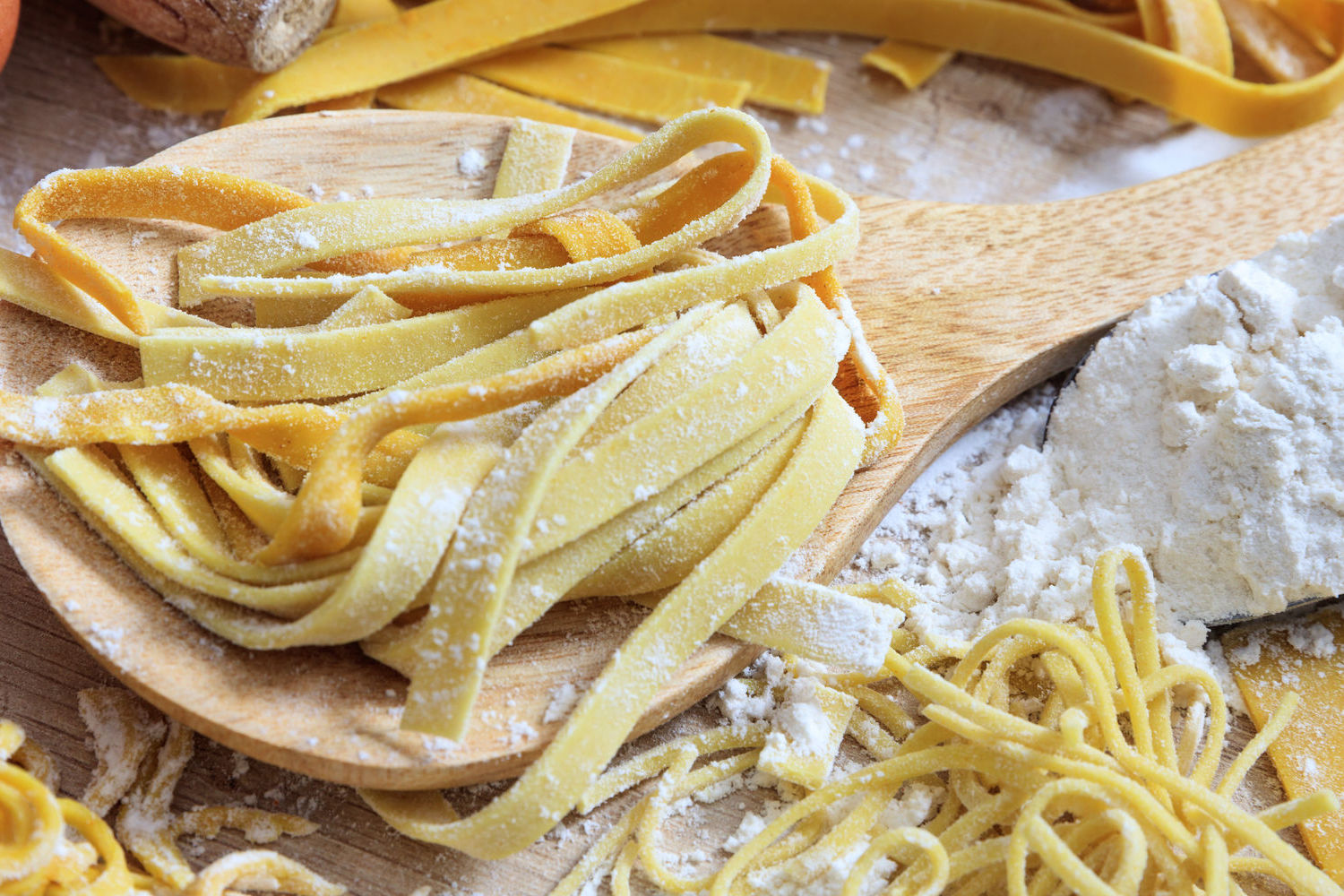 Unlike many areas of Italy, Florentine cuisine comes from a privileged place. Once the heart of Italy’s finance and trade, Florence was also the birthplace of The Renaissance and home to the Medici Family, at the time one of the wealthiest families in Europe. Meat features heavily on the menu: cured meats, steak and rabbit appear in ample amounts whilst fagoli, artichokes and spinach are popular with side dishes or in soups. The cuisine here is often hearty, colourful and warming.

This large piece of T-bone steak is a Florentine staple and a must have on a trip to Florence. It is typically cooked for 4 minutes each side so it’s still pink in the middle and seasoned with salt, pepper and lemon. This steak is often large and great for sharing.

This was once a food staple that was eaten by the working peasants of the city. The lining of the cow’s stomach is not always used in popular cooking but in Florence you will find tourists queueing up in their masses to get a trippa sandwich. Cooked with vegetables and served in a broth-soaked bun. This cost-effective lunch is great on the go. Trippa alla Fiorentina also makes an appearance in many Florentine restaurants. A dish that is served as ‘il secondo’ the main or second dish, this simple dish consists of tripe, vegetables and seasoning.

Traditionally eaten around the time of Carneval in February, this traditional Florentine sponge cake is made with ricotta, olive oil and orange zest. It can be found in pastry shops the city over and can be eaten on its own or with delightful fillings, such as whipped cream or chocolate sauce.

To get a real feel for the Tuscan life and its culinary wonders then try the ‘Market to table cooking lesson’. Meeting in Florence in the morning, guests will then be taken to a local market in the city. Before heading to a location to cook and prepare their own lunch, Florentine style. From £70 per person.

Connect with
I allow to create an account
When you login first time using a Social Login button, we collect your account public profile information shared by Social Login provider, based on your privacy settings. We also get your email address to automatically create an account for you in our website. Once your account is created, you'll be logged-in to this account.
DisagreeAgree
1
0
0
1