With sands that range from golden yellow to volcanic black, the best beaches in Tenerife have positively original and inspiring features.

Many people think of Tenerife’s beaches (or ‘playas’) as being mostly characterised by black volcanic sand; a myth that makes discovering Tenerife’s rich and varied beaches all the more pleasurable.

Despite its rugged coastline in places, Tenerife has an incredible 41 miles of beaches to explore. While some are in popular resort towns, others are a little further off the beaten track, next to traditional fishing villages or set within nature reserves beside towering mountains.

With some beaches famous for water sports and others magnificently unspoiled, these beaches cannot fail to disappoint on any luxury holiday in Tenerife.

One of Tenerife’s best loved coastlines, Costa Adeje has more than 10 public beaches and yet more private beaches at the resorts that hug the coastline.

One of the best beaches in Tenerife, playa del duque has white sands and an upmarket feeling. Bahia Del Duque resort – set in luscious tropical gardens – offers direct access to the beach from the hotel 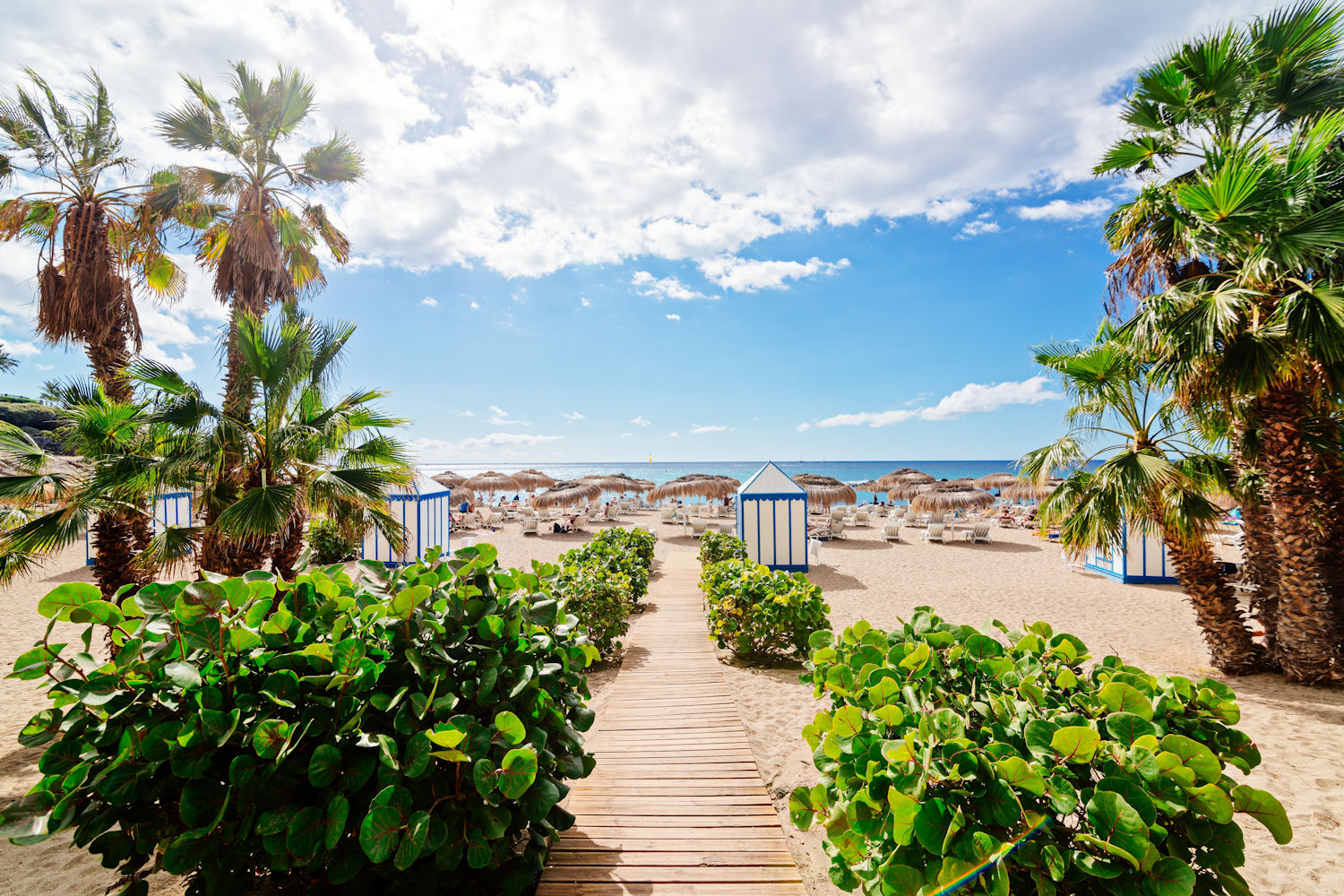 For couples who enjoy lazy beach strolls, Playa de la Enramada is a wide-open sandy beach that continues right to the edge of Costa Adeje. Ending up in the small fishing village of La Caleta, this is a place to find a small slice of traditional life in Tenerife 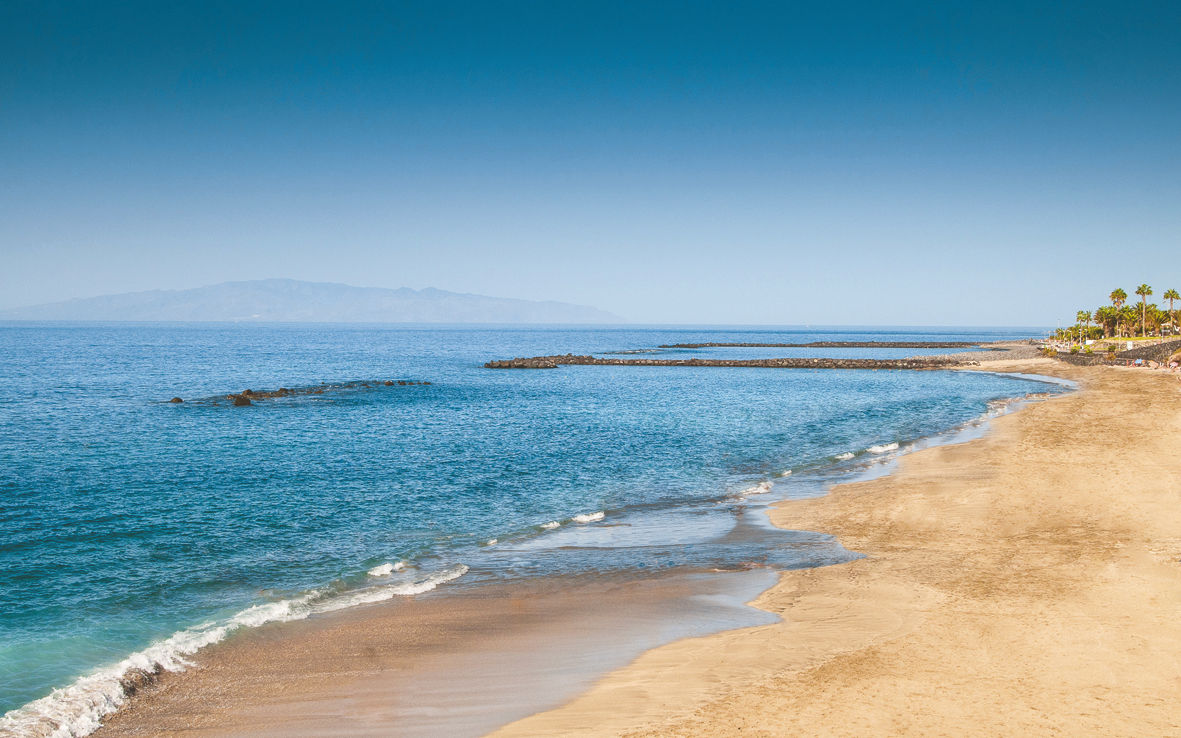 Slightly further along from La Caleta, Playa del Puertito is another beach to explore for a quiet, local feeling. Playa Paraiso – a predominantly pebbled beach – is also in this locality, and has the Hard Rock Hotel right next to it, offering direct access to the beach and an incredible saltwater lagoon. 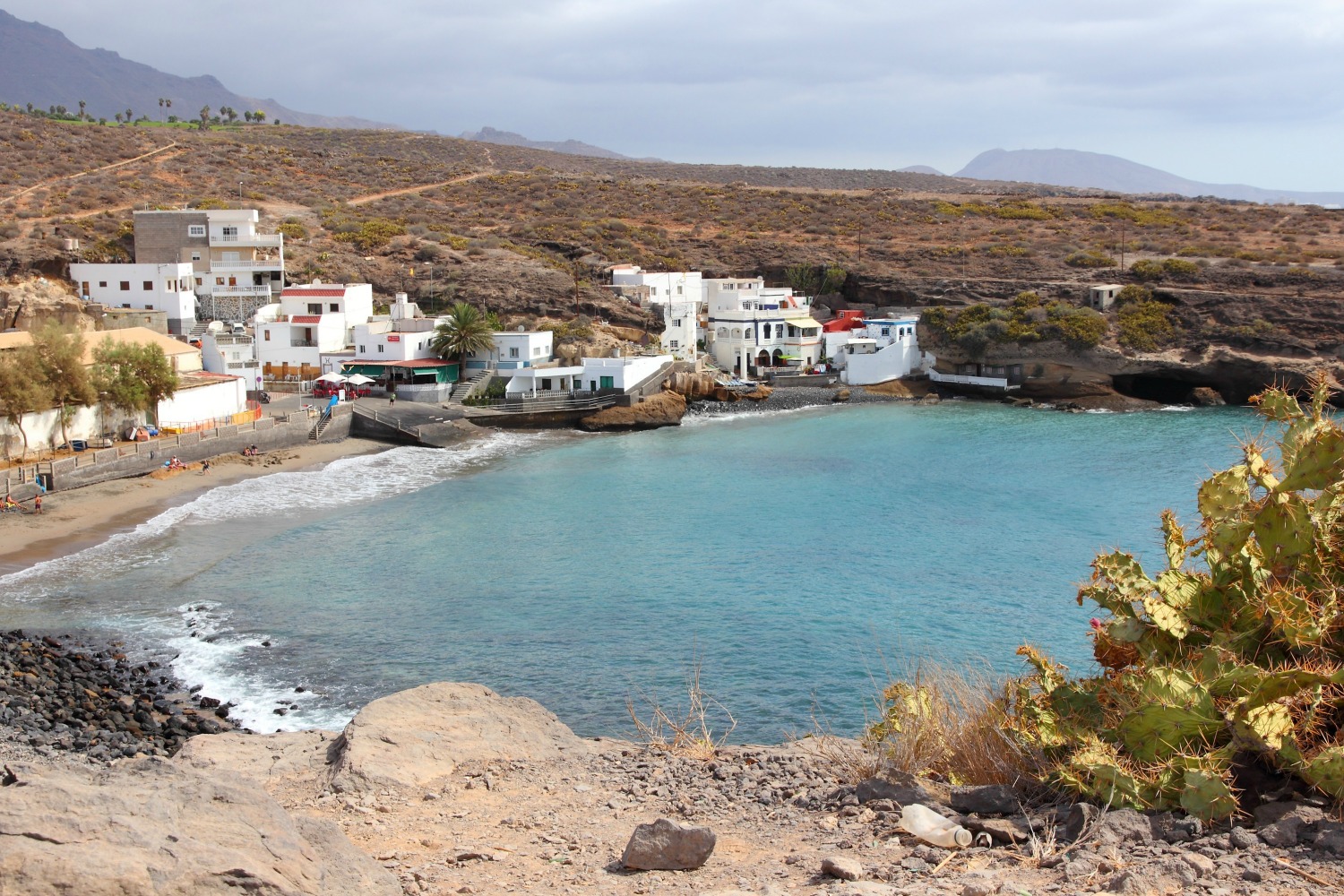 One of Tenerife’s liveliest and most popular resorts – Playa de las Americas – is also found within the Costa Adeje locality. Troya beach is one of the best beaches there, known for its fine golden sand and shallow waters. Particularly popular with families, the calm waters and wide beach make it a safe place to spend time, while older children can’t get enough of the banana boat! 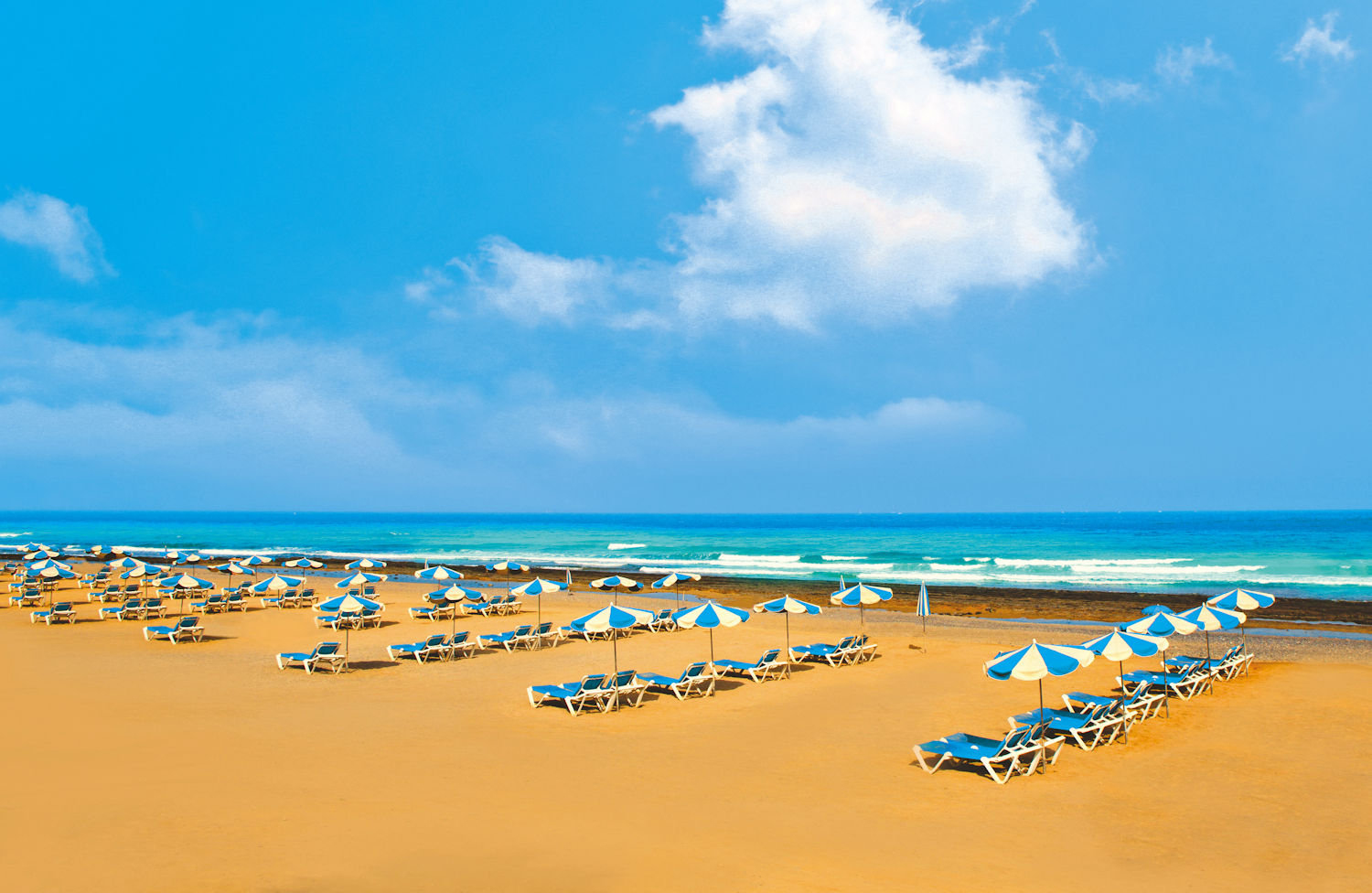 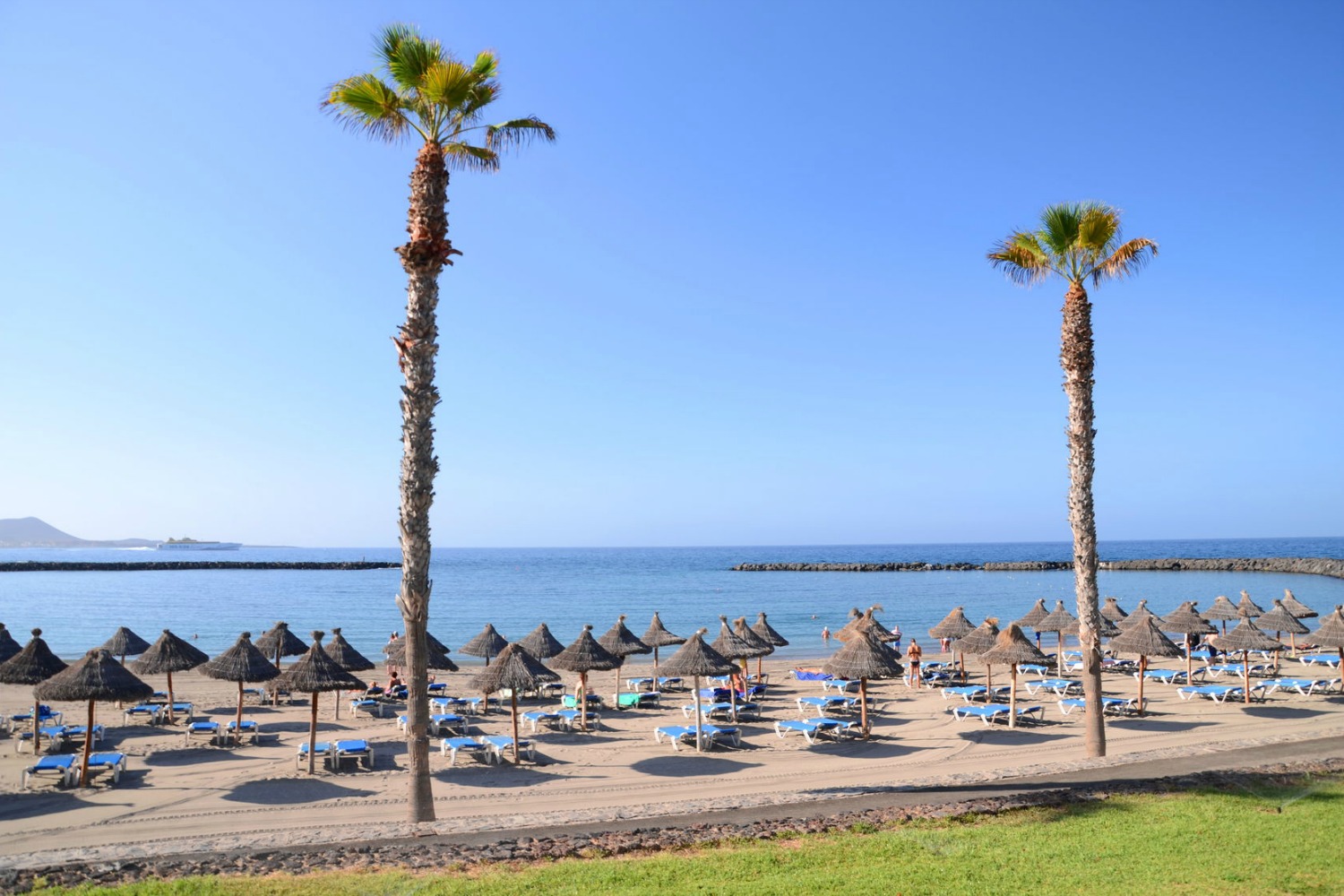 This beach in one of the southernmost parts of Tenerife is more than half a mile long and has a wide-open stretch of sand. It’s set within a protected area and has The Red Mountain (La Montaña Roja) – a striking volcano – at one end. La Tejita is also one of the largest natural beaches in Tenerife. This is a popular spot with fans of water sports too, with surfing, kitesurfing and windsurfing available. On the other side of The Red Mountain is Playa Grande, another large natural beach that water sports enthusiasts flock to. 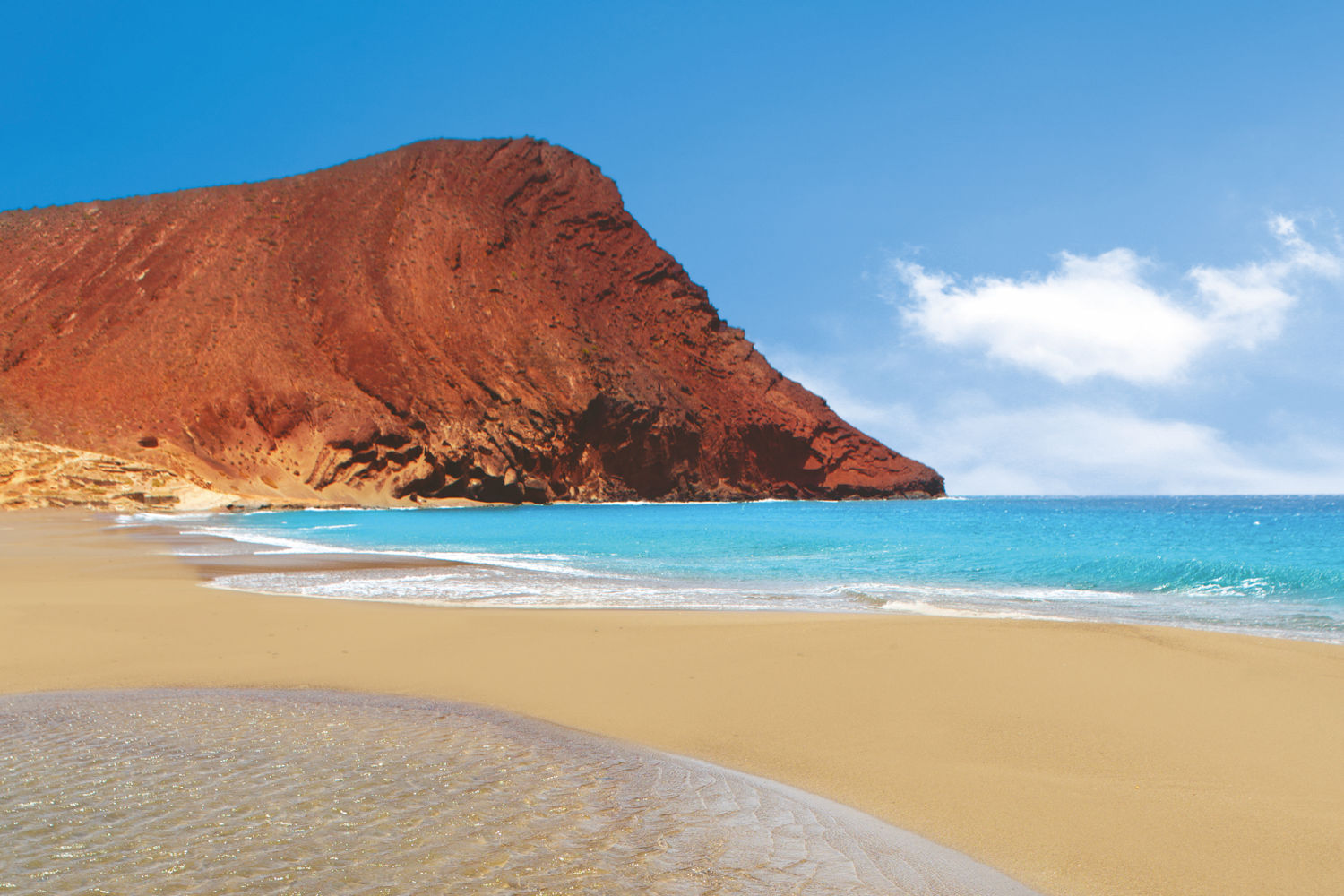 Puerto de la Cruz, in northern Tenerife, is characterised by its rich black volcanic sand beaches, an 18th century fort, and attractions ranging from the traditional to the modern. These include the Loro Parque zoo, a vibrant annual carnival and a famous sardine festival.

Playa Jardín is found in Puerto de la Cruz, and is often referred to as being the most beautiful beach in Tenerife. This is because the internationally acclaimed Canarian artist and architect – César Manrique – designed this stretch of coastline. By incorporating palm trees and botanical gardens into the perimeter of the curved beachfront – the bay, sea and view of Tenerife’s famous Mount Teide truly stand out. 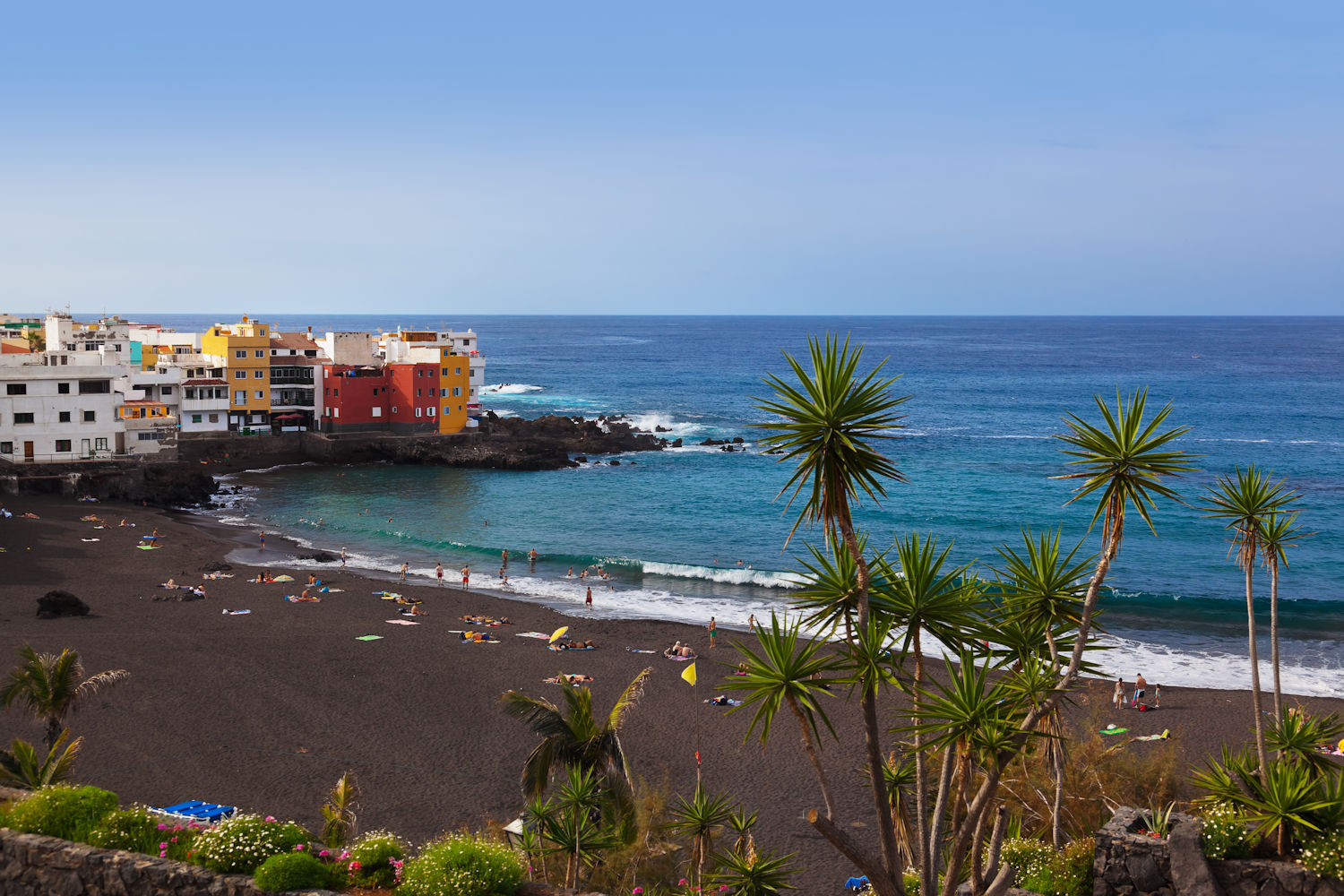 Although Playa Martianez is a smaller, slightly more pebbled beach in the town, it’s a great option for water sports enthusiasts, who can go surfing and windsurfing there. Sol Costa Atlantis is located opposite this beach and the hotel’s spa is perfect following active days spent out on the ocean. 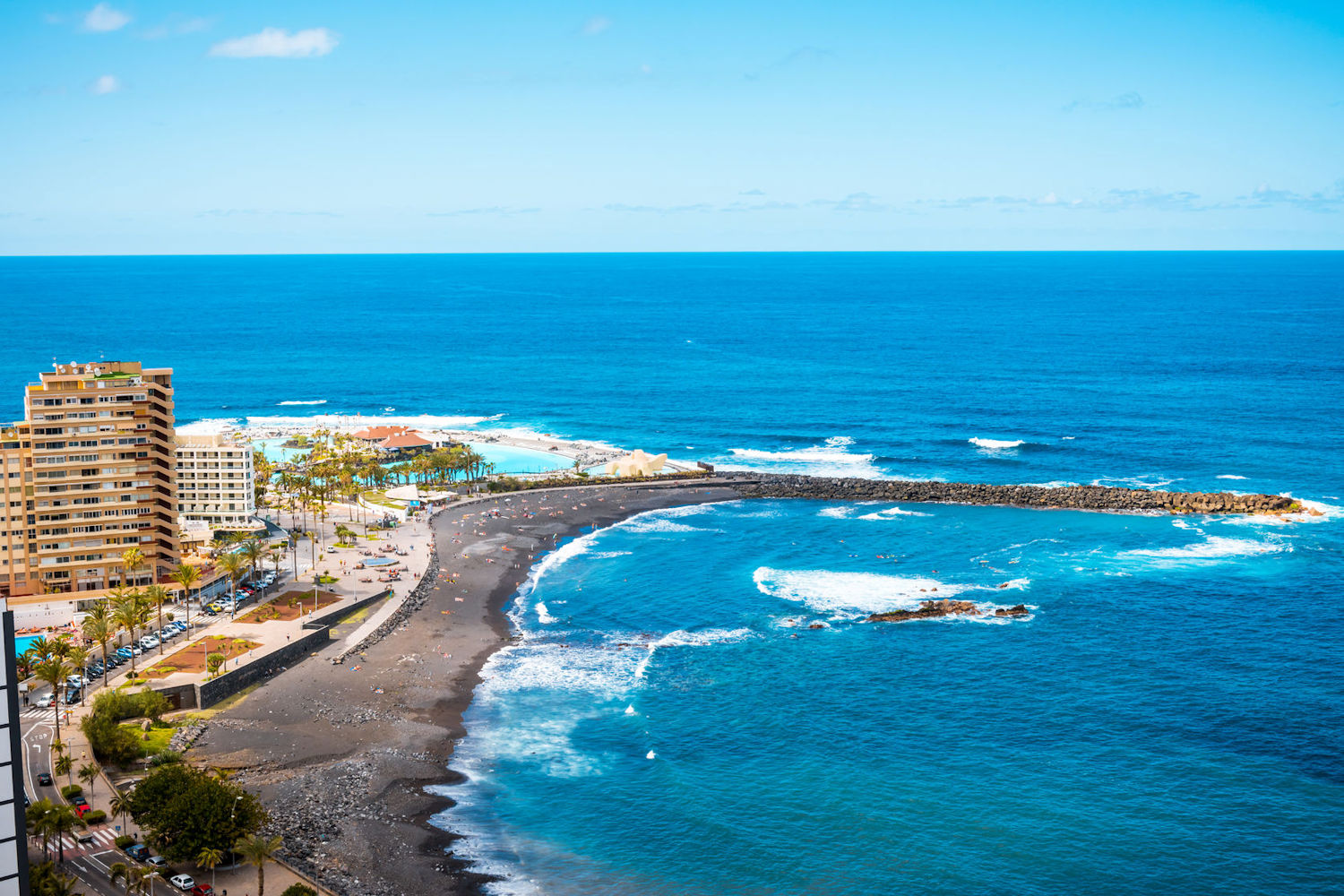 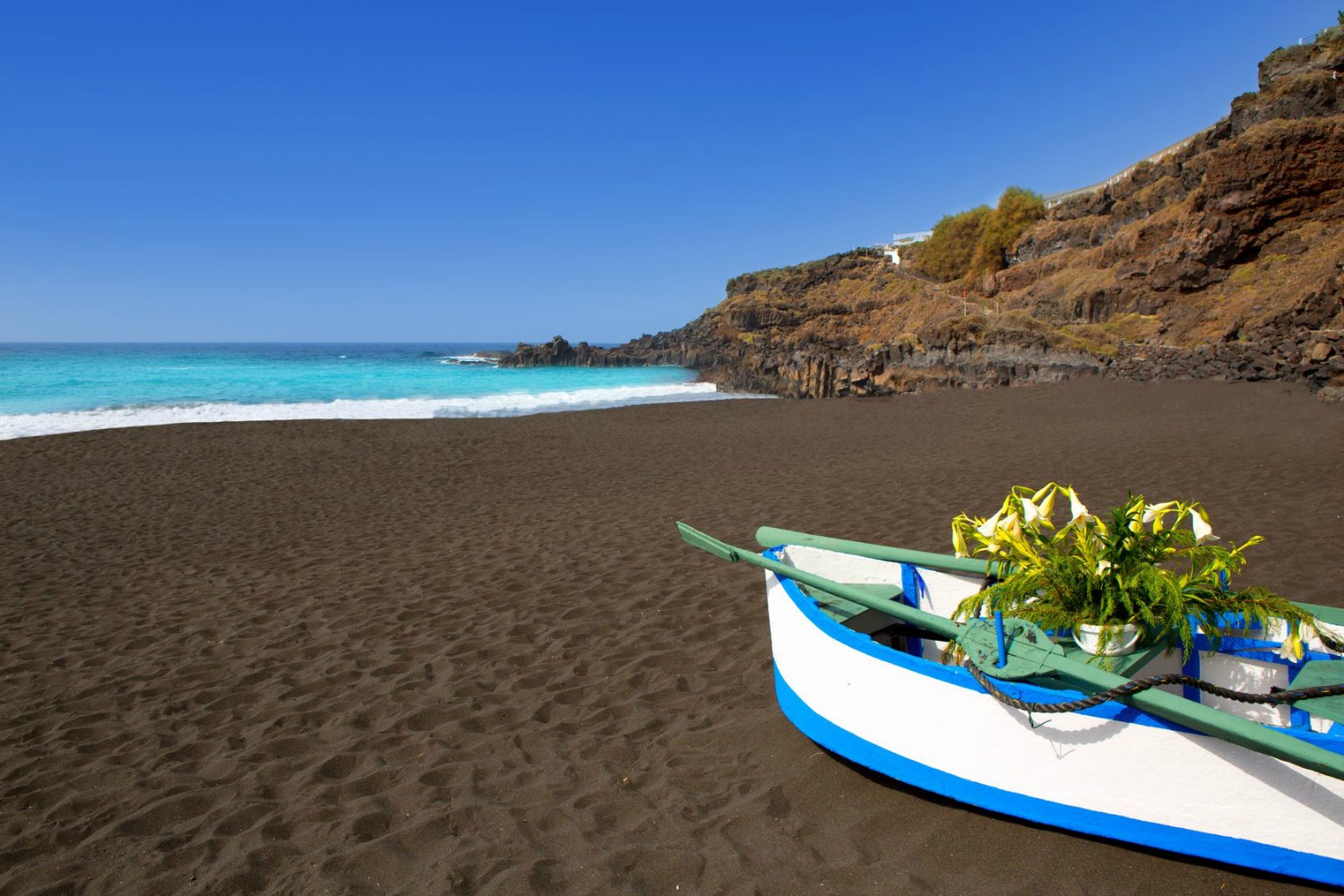 Santa Cruz is a northern town in Tenerife boasting history, culture and access to some of the most rugged nature on the island.

Offering the brightest and finest sand of all the beaches in Tenerife, Playa de las Teresitas on the island’s north-western corner is a true delight. An artificial reef attracts colourful fish, the shallow waters are ideal for paddling and the gorgeous golden sandy beach is perfect for relaxing. While there isn’t much in the way of adrenalin-pumping activities on the beach itself, Playa de las Teresitas is backed by the Anaga mountains, great for hiking and other mountain adventures. 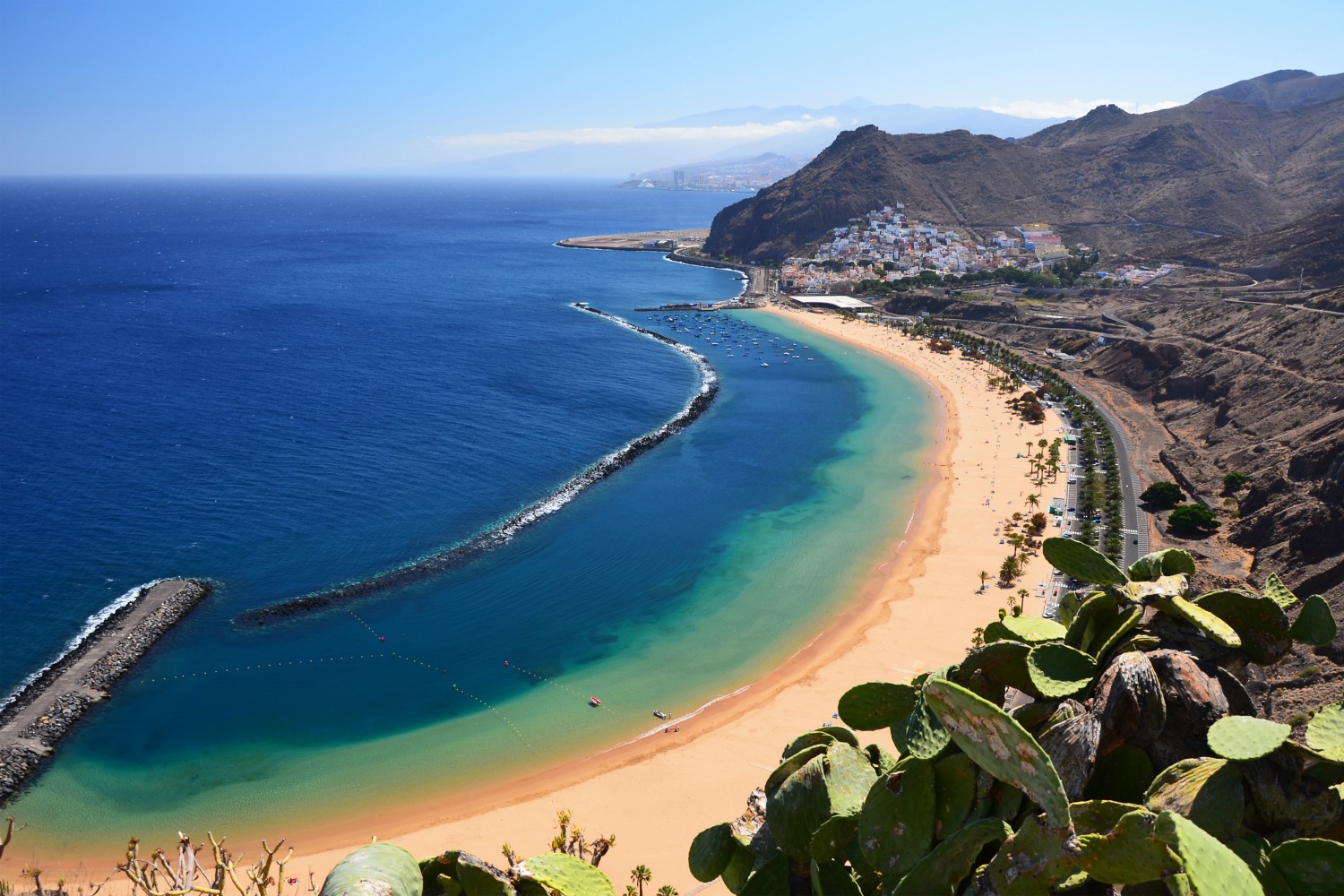 Further up the coast still is the wide Playa de Antequera – a beach that is even more of a hidden gem since it’s only accessible on foot or by boat. While there aren’t any formal facilities on the beach, it’s particularly loved by local surfers. 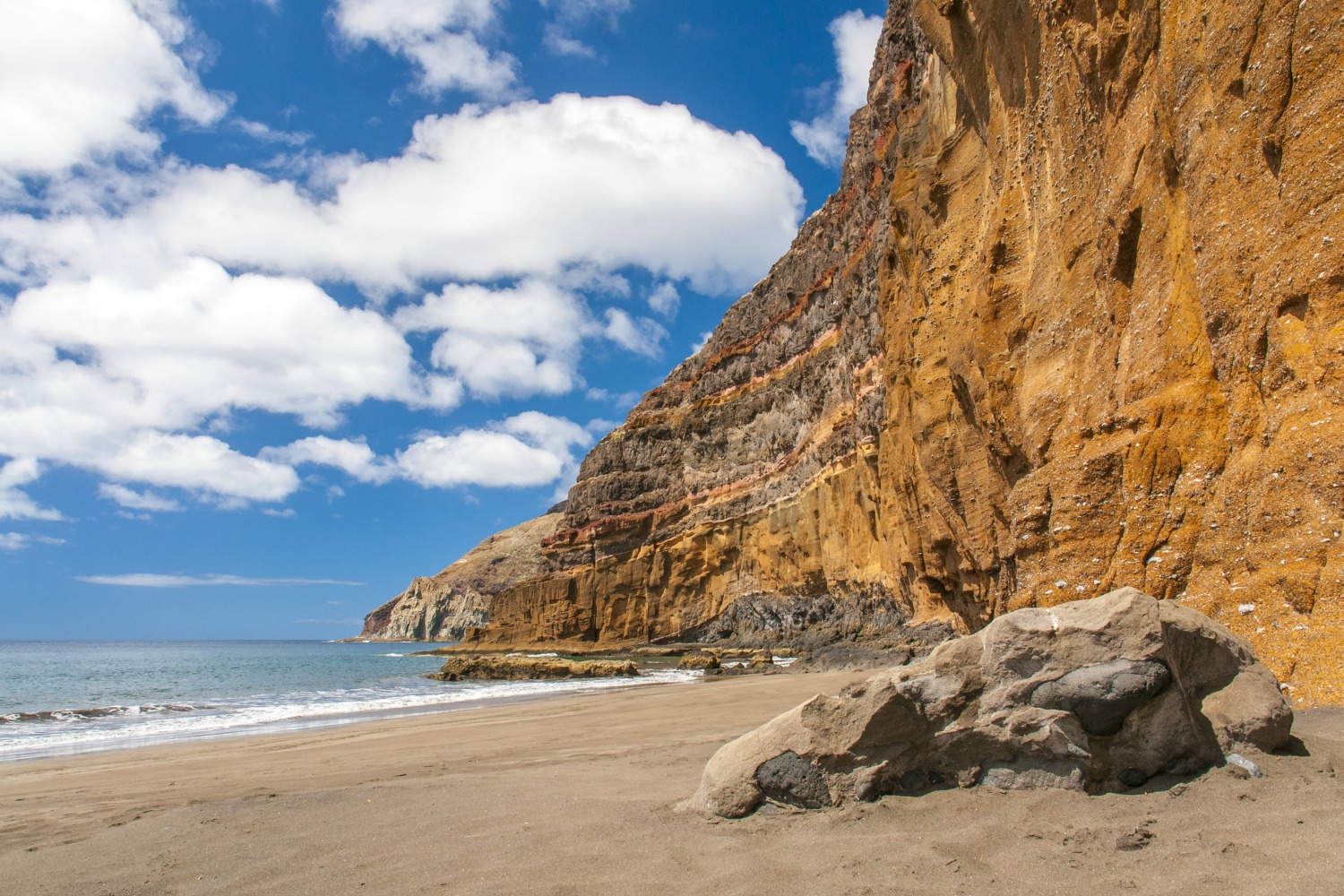 For those who like to soak up the feeling of small, traditional towns and villages, Tenerife has a number of places to choose from. While the small beaches in these towns aren’t full of amenities or splendour, they do capture an idyllic feeling of local life.

The black volcanic beach in Alcala enjoys views of local fishing boats going about their daily business, while the wafts of seafood from local dock-side restaurants tempt the taste buds. The Ritz-Carlton in Abama is perched nearby high on the cliff tops, offering panoramic views of the ocean and the neighbouring island of La Gomera.

The 15th century town of Garachico is equally romantic, with history-filled squares, nostalgic streets, and some small beaches to pay a visit to. Las Aguas Beach and Playa de Garachico have a mixture of sand, shingle and pebbles, marking quiet spots to enjoy the sun, sea and gentle boat life on the water.

Have you been to Tenerife? Which do you think is the best beach in Tenerife? Get in touch in the comments below.